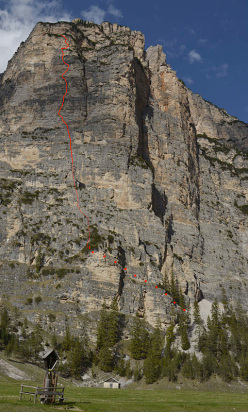 Gratta e Vinci, a new climb in the Dolomites freed by Christoph Hainz and Simon Kehrer on 14/05/2012
Photo by

Neither Christoph Hainz nor Simon Kehrer need long introductions. The two ace alpinists and South Tyrolean mountain guides know the Dolomites like the back of their hand and so if they say that their new route Gratta e Vinci - scratch and win - up the SW Face of Sas dai Tamersc has all the makings of a modern classic, well then it's certainly worth finding out more.

The beautiful "Sas dai Tamersc" has been observed and attempted by numerous alpinists and prior to our climb, only two fairly unknown routes made their way up the SW Face. To the right of the arete, up the crack and chimney, is the Classica, an old route established by Erich Kastlunger during the 1950's, while the crack immediately to the right of our new line was first climbed by my father Stefan Kehrer and Paolo Vollmann during the '80's, circa 7-!

Gratta e vinci was established by myself and Christoph while searching for the best rock quality and although completely protected with bolts and the occasional peg, it is nevertheless a beautiful alpine outing. The climbing is similar to that found on the Tre Cime di Lavaredo: very technical and at times the rock still needs cleaning.

Thanks to the marvellous surrounding and the easy access, Gratta e Vinci could soon become a highly popular Dolomite classic.