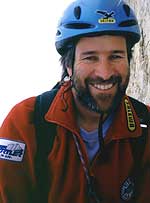 Christoph Hainz. Born in 1962, started climbing in 1982, Mountain Guide since 1992, he is also Mountain Guides Instructor. He currently lives at Riscone (BZ), South Tyrol, with his wife Claudia and children Ionas and Katarina.
Photo by arch. Hainz 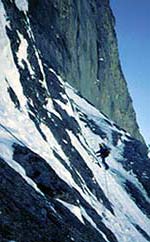 On the traverse of the Heckmaier, taken during the 1989 ascent with Engelbert Pallhuber.
Photo by arch. Hainz 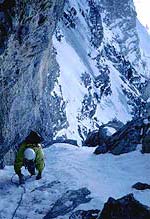 Christoph Hainz talks about his speed ascent up the North Face of the Eiger in 4 hours and 30 minutes.

1800 meters in four and a half hours. Up the North Face of the Eiger. Following the line first climbed by Heckmaier, Vörg, Kasparek and Harrer. As if to say, The Route, The Wall and The Mountain. The symbol of moutaineering in the Alps. But also the symbol of alpine tragedies. However let's leave the talking to Christoph Hainz, who recently carried out an extremely fast record ascent of the route.


So Christoph, how did your speed ascent of the Eiger come about...
By chance. On Saturday 23 March I was in Switzerland, ski mountaineering with a friend of mine, Konrad Renzler on Tödi (3.614m). The mountain is extremely beautiful and the highest in the Glaner Alps. But we didn't know what to do on Sunday...

So the Eiger sprung to mind...
Well, Konrad had never been there before. And I knew that conditions were good. So I suggested we go take a look, with the intention of soloing the Heckmaier if conditions were excellent. So the decision was left right up to the last moment.

And that's what happened
Yes. On Sunday morning we both climbed up to the long traverse beneath the North Face. "I'll go to the start of the route" I said " and if I don't come back it means that I'm somewhere on the wall." Konrad set off with his skis to the Jungfrau, and we said we'd be in touch by phone.

And the route was in condition?
The conditions were perfect. There was a party already beneath the Hinterstoisser traverse.

This wasn't your first time on the North Face
No, I had climbed it 14 years ago, in March 1989. Together with Engelbert Pallhuber we wanted to climb the route in a day, but we got caught up in the first hard crack system for almost three hours, then the Exit Cracks where we climbed too far to the right, and were forced to spend an uncomfortable night bivying.

This time you set out to climb quickly
I didn't really set out to make a record ascent, but just to climb the Eiger. But I know myself, I knew I'd be quick. The important thing though was to climb the route, to be in the right frame of mind and to be physically on form. The North Face requires all of this. It's always demanding psychologically.

You set off like a rocket
I started out at 8.50am. I self-belayed only on the first "Difficult crack". The rock was slippery and difficult. I then overtook the climbers I had seen earlier on the Hinterstoisser traverse.

And so you continued up
I climbed light, and I was helped by the fact that i could follow the tracks of another party ahead of me. I overtook them on the third icefield.

Light… what did you take with you?
A waterbottle, a bivy bag, a 40m kevlar rope, 2 screwgate carabiners , 2 ice axes and a set of crampons.

We're on the third icefield. What next...
After overtaking the second team I continued up The Ramp, along The Traverse of the Gods and up The Spider. From here I looked down and only saw the second team. The first team had probably turned back...

What were conditions like on "The Spider"
Conditions were excellent, perfect. 50° ice. Almost a walk. Fourteen years previously conditions were completely different, and we got drenched through. And that's also how we spent the night.

You then reached the summit, after just 4 and a half hours.
I reached the crest at 13.20 and at 13.30 I was on the summit. With an empty waterbottle and the sun beating down on me!

What thoughts crossed your mind?
That this time round the ascent had been easy. A nice race, but not difficult. And so, instead of descending down the Mitellegi ridge, I descended towards Munch.I didn't know the route and at one point I wasn't 100% sure that I was on track. But by racing down I managed to catch the last train back to the valley.