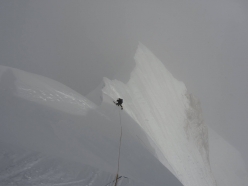 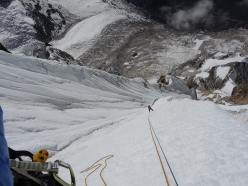 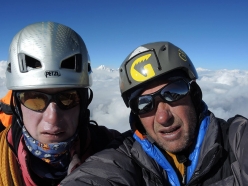 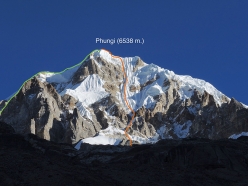 On 28 October 2017 Russian mountaineers Yury Koshelenko and Aleksei Lonchinskii completed the first ascent of Phungi Peak (6538 m) in the Nepalese Himalaya. Climbing in alpine style, the two required five days to forge their route up the mountain’s SW Face.

Towards the end of October the Russian mountaineers Yury Koshelenko and Aleksei Lonchinskii hit it big in the Himalaya where they successfully made the first ascent of Phungi Peak, the beautiful and hitherto unclimbed 6538 m mountain situated to the west of Manaslu in Nepal.

Setting off on 26 October, the duo climbed a fairly direct line up the 1500 m high SW Face in alpine style, requiring three days to reach the summit. During their clim the Russians breached up ice up to 80° and after the second bivy, a mere five pitches below the summit, the weather reportedly worsened, becoming extremely cold and windy. The summit was reached not without difficulties via the exposed ridge at 16:30 on 28 October and after spending a night just below the highest point Koshelenko and Lonchinskii needed another two days to descend not via the ascent route, but down the unknown West Ridge.

As German journalist Stefan Nestler rightly points out, 54-year-old Koshelenko and 35-year-old Lonchinskiy belong to the élite of Russian alpinism and in the past both mountaineers have been awarded with the Piolet d’Or for their exceptional ascents. Koshelenko received the prize in 2004 for the first ascent of the South Pillar of Nuptse East (7804 m) climbed in November 2003 with Valeri Babanov, while a golden ice axe was awarded to Lonchinskii for the first ascent of the SW Face of Thamserku (6623 m), carried out in spring 2014 with Alexander Gukov.