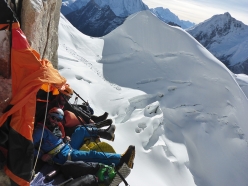 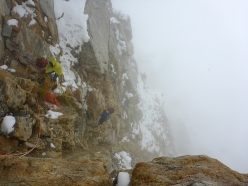 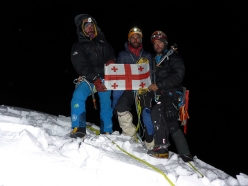 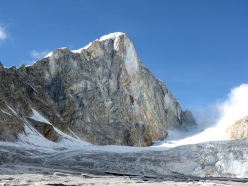 Georgian mountaineers Giorgi Tepnadze, Bakar Gelashvili and Archil Badriashvili have established a new route up the SE Face of Larkya Main. It is also the first ascent of this 6425m high mountain in the Himalaya.

Giorgi Tepnadze (28), Bakar Gelashvili (31) and Archil Badriashvili (27) have hit it big in the Himalaya with an ascent that is of special importance, in particular for their home country Georgia. In making the first ascent of the SE Face of Larkya Main in the Manaslu area, the trio have completed what they describe as being “the first Georgian route in Himalayas.”

Speaking to planetmountain.com, Archil Badriashvili explained: "First the Himalaya was hidden to us behind the Iron curtain, then it was followed by the first decades of independency and hard times… Taking a rare chance to travel to Himalayas we chose this unclimbed mountain and stunning wall, clearly visible from the Manaslu camps as you look north. The project was ambitious, as it would be a first Georgian route in Himalayas. We had little information about this valley and the mountain, we only knew for certain that the weather can be tricky.

After 5 days of walking, over the Larkya La pass (5100 m) we reached our base camp at 4550 meters, established ABC and ascended to 5200 meters to observe the face and then descend. The next day we started our ascent to ABC, carrying really heavy bags and climbing to 5200 meters again, past some icy sections before reaching a labyrinth of crevasses on the Larkya plateau to establish Camp 2 at around 5600 meters. There we waited for the weather to improve slightly, and the next day we climbed three pitches before rappelling back down, wet and cold, to the base.

The route we chose turned out to be very different from the pictures, but the line was clear from objective hazards; the main reason we chose the central wall was that it looked steep, safe and logical. We needed six days of climbing, past rock of differing quality and difficulties up to 6a, M4 and pitches of continuous A3+. Overhaning, the route got harder the higher we climbed. We stood on the summit of Larkya main in the morning of 27/09/2017, nine days after having left ABC. We descended via the same route and returned to BC two days and nights later. In the same restless tempo we soon completed the beautiful Manaslu trek and 150km long walk; our journey lasted 38 days in total."