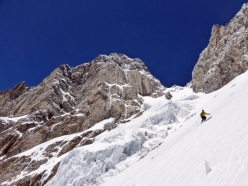 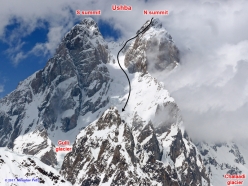 Ushba with its South and North summits (4698 m) and the East couloir
Photo by Miroslav Peťo, Maroš Červienka 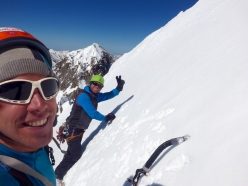 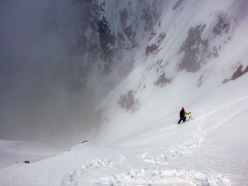 Last May and June Slovakian alpinists Miroslav Peťo and Maroš Červienka carried out a series of difficult ski descents in the Caucasus massif in Georgia: the SW Ridge of Tetnuldi (4858 m), the SE couloir of Chatyn Tau (4412 m) and, above all, the SE couloir of Ushba North summit (4698 m).

Last May and June Slovakian alpinists Miroslav Peťo and Maroš Červienka spent a fortnight in the Svanetia region of NW Georgia in order to climb and ski in the Caucasus massif. After reaching Mestia on 23 May and waiting for the unusually cold weather to improve they acclimatised by climbing to the summit of nearby Mt Tetnuldi (4858). Due to poor snow conditions they abandoned the original plan of climbing and skiing the mountain’s west face and instead ascended and SW Ridge, with Červienka skiing from 4300m while Peťo skied the 1100m line from the summit all the way down to the Kasebi glacier before returning to the picturesque village Adishi.

Due to its proximity to the Black Sea, unstable weather is a constant in this region. When the next weather window arrived the Slovakians attempted the enormous SE couloir of Chatyn Tau (4412 m), but were caught by an unexpected storm during their bivouac on the Chalaadi glacier. A day later they consoled themselves with an ascent of Koruldi Peak (3328 m) and, with time now beginning to run out, they opted for a single-push ascent of the 1800m high Chatyn Tau SE couloir, starting directly from the valley bottom at an altitude of 1600m. Setting off at 00:30, they ascended 2800 vertical meters to summit Chatyn Tau after 10 hours of effort. An hour behind schedule, they rested only shortly and then started skiing at about 11:00 am before the snow transformed too much. The first 900 meters are roughly 50-55° steep with E3 exposure; Maroš down climbed this first section, Peťo skied right from the summit, scoring what may well be the first continuous ski descent of the line opened by experienced ski mountaineers Peter Schoen from Austria and Trevor Hunt from Canada, who required one rappel through the glacier on the lower section in 2013.

The long day on Chatyn Tau required two rest days before the Slovakians were ready for the main objective of the trip, Mt. Ushba, considered a sort of "Matterhorn of the Caucasus." From their previous reconnaissance they believed the South summit would not be skiable, but the North summit and its SE couloir looked feasible. With only two days prior to their plane home, they immediately set of from Mazeri village (1600 m) and continued to the Gulli glacier where we found a nice spot for their small tent in 2900 m. They set off at 2:30am on 5 June, encountering transformed corny spring snow in the east gully. They ascended this quickly, climbing past the difficult and steep mixed terrain (60°+) to exit the gully and reach the snow field below the north summit. Another exposed gully led to the summit, reached 7 hours after having left their bivouac. In perfect weather they enjoyed spectacular views across the Georgian and Russian parts of the Caucaus, and then began preparing for the descent. Peťo waited while Maroš down climbed the first section, but when the snow started to transform in the east-facing crux he started his ski descent, side-stepping for circa 30m where the gully was too steep and technical to make any turns. They then skied the couloir together, enjoying perfect spring conditions and, as Peťo told planetmountain.com "happy that Svanetian Nature allowed us to ski such beautiful and challenging lines in its mighty kingdom... "

Peťo concluded "According to available information (from Georgian and Russian mountain guides, as well as, experienced steep skiers in the Alps) Ushba has never been skied before despite a few tries. For me the first ski descend of Ushba North was fulfilled dream and the most difficult extreme ski descent I have ever done."

23.09.2011
Caucasus 2011, the results of the second expedition of 'On the trails of the glaciers'
The second stage of the project "On the trails of the glaciers", initiated on 28 July, has now come to an end. Created by Italian photographer and alpinist Fabiano Ventura, this project studies the effects of climate change on the Earth's most important mountain glacier.