► News ► Environment ► Caucasus 2011, the results of the second expedition of 'On the trails of the glaciers'
Versione italiana 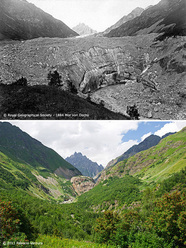 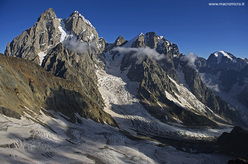 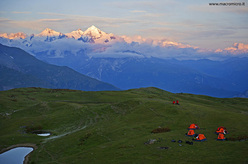 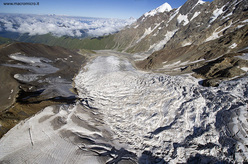 PORTFOLIO / gallery Portfolio: Caucasus 2011, the results of the second expedition of 'On the trails of the glaciers'

Caucasus 2011, the results of the second expedition of 'On the trails of the glaciers'

The second stage of the project "On the trails of the glaciers", initiated on 28 July, has now come to an end. Created by Italian photographer and alpinist Fabiano Ventura, this project studies the effects of climate change on the Earth's most important mountain glacier.

Four main glaciers examined; twenty comparative photographs taken from the same perspective used by the pioneers more than 120 years ago; numerous ablation poles positioned; two data loggers installed; three helicopter explorations; two years of preliminary studies and of logistical organization; more than a month of on-field activity. These are the numbers of "Caucasus 2011", the second expedition of the project "On the Trails of Glaciers".

Only a few days have passed since the end of the expedition and the first results have already been analysed, based on photographic comparisons and scientific observations taken during the expedition: the glaciers in the Caucasus show huge signs of retreating as well as a significant loss of height. The Chalaat glacier for example has thinned out by 200m while retreating by more than 3km.

The Caucasus mountain range extends 1200km between the Black and the Caspian seas and like few other, embodies natural features such as the highest peaks in Europe as well as glaciers which are important due to the physical and geological characteristics. The Caucasus was selected as the second destination of the project "On the Trails of Glaciers" with the aim of measuring the glacier and obtaining high-resolution images which might reveal the evolution of the glaciers, 100 years after the research carried out by the first explorers.

The expedition, led by Fabiano Ventura, travelled through a mostly uncontaminated and unexplored region north-west of Georgia, characterized by the highest Caucasian peaks between 3000 and 5000 meters. The main aim of the expedition was to photograph the historical pictures from the same view point, to evaluate variations in the surface of the glaciers and to measure the speed of glacier melting by installing of ablation stakes so as to correlate the thickness of the debris floating on the ice, its fusion rate and the reflective power of the different surfaces.

Fabiano Ventura was joined in the field by glaciologists Prof. Kenneth Hewitt and Dr. Riccardo Scotti. Furthermore, a TV crew comprised of film director Marco Preti and cameramen Luca Venchiarutti aimed at realizing a documentary produced by SD Cinematografica which will be soon broadcasted on the main national and international TV channels.

Ventura shot the historical photos: this was possible thanks to his studies which preceded the expedition, to identify the position used by the first photographers/explorers more than a century ago. Specifically, the mission "Caucasus 2011" retraced the tracks of photographers such as Vittorio Sella (1889, 1890 and 1896), Mor von Dechy (from 1884 to 1902), Mario Piacenza (1910), Vittorio Ronchetti (in the first two decades of the last century) and Andrea Pollitzer (1929), and of pioneers such as Hermann Woolley, Albert Frederik Mummery and Douglas William Freshfield.

It was of upmost importance to find the exact position from which Mor von Dechy, 127 years ago, shot the historical image of the Tviberi glacier, and to reach the summit of Banguriani (3885,), from which Vittorio Sella, 121 years ago, obtained a spectacular 180° panoramic sequence of more than by merging seven 12x20cm photographic films.

The help of the Georgian Embassy in Italy and of the Italian Embassy in Georgia was extremely important for the expedition, too. The Georgian Ministry of Defence provided a military helicopter that allowed the team to carry out the first important aerial reccy of the glaciers of the region.

The expedition noted how the Chalaat glacier, whose snout reaches the lowest height in the entire Georgia, strikingly retreat during the last 100 years (about 3km in length and 200m of thickness). Despite difficult weather conditions which often slowed down team activities, the expedition managed to locate the spot form where Vittorio Sella realized his master shot of the Lardaadi Adishi, one of the most spectacular Svanetian glaciers. Reaching the glacier snout was very important and this allowed interesting sampling on its lateral-frontal part, which testify the dynamism and reactivity of this huge glacier to climate change.