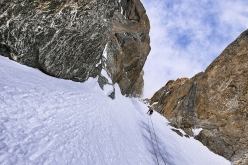 Climbing on the West face of Arjuna, day 2
Photo by Marko Prezelj 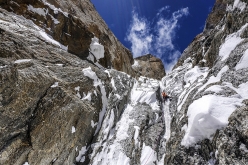 First day of climbing on the West face of Arjuna. Beginning of greater technical difficulties.
Photo by Urban Novak 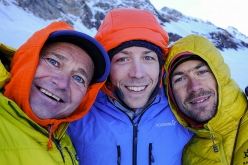 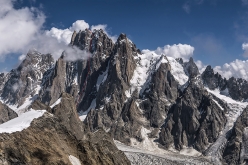 In the Indian Kishtwar Himalaya the Slovenian alpinists Aleš Česen, Marko Prezelj and Urban Novak have climbed two new routes: All or nothing (6250 m) up the West Face of Arjuna (6250 m) and the North Ridge of P6013 (6038 m). Both climbs were carried out alpine style.

New Slovenian climbs in India’s Kishtwar Himalaya once again. At the end of May the talented alpinists Aleš Česen, Marko Prezelj and Urban Novak travelled to the Kijaj Nullah valley, a relatively little-known valley which in 2015 Prezelj and Novak wanted to visit when they climbed new routes up the East Face of Cerro Kishtwar and Chomochior together with Hayden Kennedy and Manu Pellissier.

While in the past the Slovenians visited the Kishtwar Himalaya in autumn, this year they decided to climb in spring, hoping to find better conditions for mixed climbing. On 29 May they established base camp at 4008 m on the western side of the Kijaj Nullah glacier. In order to acclimatise they decided to climb nearby P6013 which would have provided a good view onto the expedition’s main objective, the West Face Arjuna (6250 m).

6038 m high, P6013 had only been climbed once before, namely in 1979 by the Polish alpinists Krzysztof Łoziński, Stanisław Gorgon, Jan Marczak, Józef Makinia and Stanisław Pelczarski. From 2 - 4 June 2017 Česen, Prezelj and Novak proceeded along a line on the North Ridge to make the second ascent of the mountain. After a bivy on the glacier, they climbed to 5500m where they made their second bivy. From here they reached a side summit in order to scope a possible line to the main summit, which they reached the next day. From the mountain’s highest point they made out an obvious line up the West Face of Arjuna, via a gully to the right of the main summit. "We all agreed that this line deserved our full attention" explained Novak "Motivated and full of expectation for the days to come, we descended to base camp on the same day."

The weather worsened but nevertheless on 10 June they stashed some gear at the base of the West Face where they planned to establish Advanced Base Camp, and then returned to Base Camp. In fine weather they returned on 15 June and broke a trail to the base of their planned route. On 16 June they set off, at 5:00 am and not at 2:00 am as initially planned due to low lying clouds.

For the next two days the trio climbed their 1400m outing All or nothing, ED+ (M7+, Wi5+, A0), which checks in as only the second ascent of the mountain,after the 1983 first ascent carried out by Mirosław Dąsal, Jerzy Barszczewski e Zbigniew Skierski, and also the first in alpine style. On day one Česen, Prezelj and Novak climbed the lower slopes unroped, encountering good snow and ice. They then roped up for another 6 pitches of mixed terrain where they dealt with some occasional avalanches of wet snow before setting up their first bivy site under they we believed would be the crux section of the entire route. The next day the successive three pitches required 8 hours, and these were followed by another ice pitch and seven snow pitches before they bivied once again, circa 3 pitches shy of the summit ridge. They continued the next morning and reached the 6250 m high summit towards midday before abseiling immediately down the route and returning to ABC at midnight.

Towards midday on 19 June the trio began making their way back to base camp; only half an hour later it started to rain and it didn’t stop for the next three days. On 24 June they left base camp and started their journey home "with huge smiles on our faces" said Novak, adding "rarely do you get all the dots to connect – conditions, weather and personal feelings that fit in so precisely as they did for us this year. Truth to be told, this year we could easily leave this valley without climbing or even trying our main objective and we could walk out with our "heads held high".

In conclusion, Novak explained: "The Kishtwar region offers some interesting climbing objectives. The Kijaj Nullah valley is not an exception. This whole area has exceptional playground for the modern style of climbing as well as in rock as in mixed and snowy-icy terrain. Therefore, we believe the area may get a lot more visits from the climbers in the future. We could also say that this valley characterises as an upgrade of a very popular Pakistani Charakusa valley (in the sense of terrain complexity). "