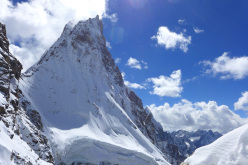 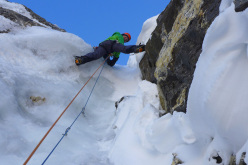 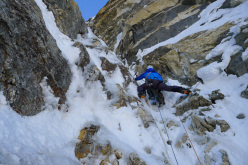 According to extensive research and far as could be established, Kishtwar Kailash had been attempted only once previously, namely in 1989 by a Scottish expedition, while ensuing acute political troubles resulted in the area being closed to mountaineers from 1994 until last year. The fact that Kishtwar Kailash was a plum objective can be gleamed from the following detail: Fowler first spotted Kishtwar Kailash back in 1993 during his successful expedition to Cerro Kishtwar and a photo he took from the summit revealed a striking peak that, in the right circumstances, would be perfect for exploratory mountaineering. This explains why, at the first opportunity last year, Fowler applied for a permit to attempt the peak.

Supported by Mike Morrison and Rob Smith, Fowler and Ramsden climbed alpine style from 4 - 10 October up a 1500m line along the SW Face, described by Fowler as "a great route, with spectacular situations and varied climbing up to Scottish VI."

Fowler explained: "There is no easy way up Kishtwar Kailash and Paul and I are extremely happy that we managed to make the first ascent via the dramatic south west face. After acclimatising, we left base camp on 4th October and, following an open bivouac at 6,200m, got to the summit during the morning of 9th. The outcome was in particular doubt on day four, which involved several very hard mixed pitches up a couloir cleaving monolithic walls. The descent was almost entirely by abseil down the line of ascent. We managed to descend a fair way on the summit day and completed the return to base camp by a very long day on 10th."

It is worth remembering that Mick Fowler and Paul Ramsden form a formidable, long standing partnership with countless successful expeditions to the Greater Ranges to their name such as the Central Couloir of Mt Siguniang (China, 2002), Manamcho (Tibet, 2007), the North Face of Sulamar (China, 2010) and Mt. Shiva (India, 2012). As many will remember, both Siguniang and Shiva were awarded with the prestigious Piolet d'or.