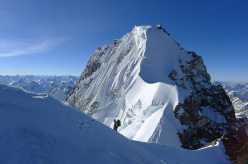 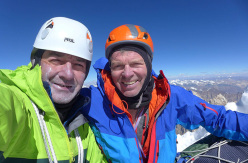 Paul Ramsden and Mick Fowler on the summit of Hagshu (6,515m) after having made the first ascent of the NE Face, Kishtwar, Himalaya
Photo by Mick Fowler archive 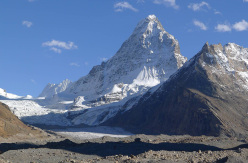 British mountaineers Mick Fowler and Paul Ramsden have made the first ascent of a new route up the unclimbed NE Face of Hagshu, Kishtwar, Himalaya.

It's autumn and, like almost every year in this period, Mick Fowler and Paul Ramsden have just returned from a trip to explore and climb in the Greater Ranges. This September the duo travelled to the East Kishtwar region of the Indian Himalaya with their sights set on Hagshu, 6,515m.

Travelling with Steve Burns and Ian Cartwright, Fowler and Ramsden had secured a permit to climb the North Face, but as a result of an administrative mix–up this was successfully ascended during roughly the same period by the Slovenians Marko Prezelj, Luka Lindič and Aleš Česen. Fowler and Ramsden quickly changed objectives and opted for the equally appealing NE Face, climbed by the duo alpine style. After summiting on 6 October they then descended via the SE ridge, returning to Base Camp six days after setting out.

Fowler commented "I first spotted Hagshu when making the first ascent of nearby Cerro Kishtwar in 1993 and was reminded what an eye catching peak it is last year while on Kishtwar Kailash with Paul." Political troubles prevented access between 1993 and 2010, explaining in part why the peak has so little ascents. "Few mountains have an ascent history as curious as Hagshu. There have been four ascents to date and - two within days of each other in 1989 and two within days of each other 25 years later. And all of them have been by different lines." explained Fowler, adding "Now we have spotted something else of interest while on Hagshu. The Himalaya just keeps on giving. It’s a great time to be a Himalayan alpinist."

It is worth remembering that Mick Fowler and Paul Ramsden form a formidable, long standing partnership with countless successful expeditions to the Greater Ranges to their name such as the Central Couloir of Mt Siguniang (China, 2002), Manamcho (Tibet, 2007), the North Face of Sulamar (China, 2010), Mt. Shiva (India, 2012) and Kishtwar Kailash (India, 2013). As many will remember, both Siguniang and Shiva were awarded with the prestigious Piolet d'or.

Note: the first official ascent of the peak is attributed to the British expedition comprised of Robin Beadle, Tim Whitaker, Max Holliday, Phil Booth and Ken Hopper that summited on 16 September 1989. Two weeks earlier the Poles Pawel Jozefowicz and Dariusz Zaluski reached the summit via the SE Ridge, but since they did not have a permit, their ascent remained undercover.