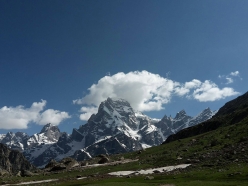 Kishtwar Shivling, Indian Himalaya. The East Pillar was first climbed by the Italians Nicola Binelli, Luca Cornella, Sillvestro Franchini and Tomas Franchini on 8-9/06/2016 along their route Via dei Trentini.
Photo by Silvestro Franchini 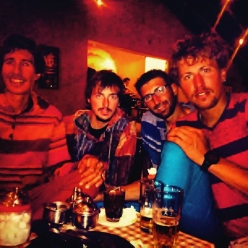 Tomas Franchini, Nicola Binelli, Luca Cornella and Sillvestro Franchinii celebrating after their first ascent of Via dei Trentini that climbs the East Pillar of Kishtwar Shivling
Photo by Silvestro Franchini

The unclimbed East Pillar of Kishtwar Shivling is no longer unclimbed. It was ascended on 8 and 9 June by Nicola Binelli, Luca Cornella, Silvestro Franchini and his brother Tomas who, with their new Via dei Trentini, have carried out a noteworthy first ascent in the Indian Himalaya.

The team reached Bujan Base Camp in the Kishtwar (Jammu Kashmir) region on 22 May after a long, 7-day approach, with their minds set on the magnificent East Pillar of Kishtwar Shivling. A first attempt almost ended in tragedy when a flake chopped two of their ropes, but on 8 and 9 June the four then successfully summited the 5780m high pillar.

Further details are awaited in due course as the expedition is currently returning to Italy. At present we know that the climb included a difficult bivouac and 22 hours climbing. Furthermore, the route was climbed without bolts and follows the weak points of the face, past much overhanging terrain. While the height difference is 800m, the route totals almost 1000m in length.