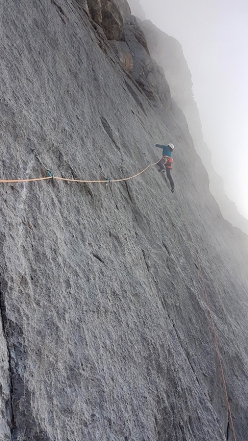 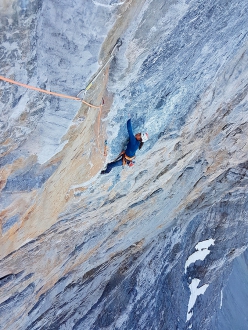 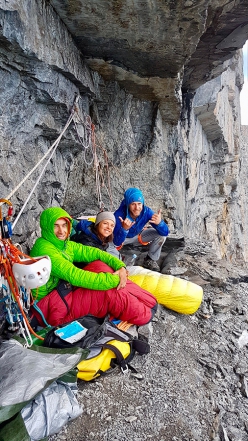 Swiss climbers Nina Caprez and Aymeric Clouet have repeated 'La Vida es Silbar' up the North Face of the Eiger.

Swiss climber Nina Caprez is having quite a summer up in the Alps. After clocking in a fast repeat of Voie Petit up Grand Capucin in the Mont Blanc massif, the 32-year-old turned her attention to the North Face of the Eiger for the very first time.

Teaming up with local Roger Schaeli, she embarked up Gelber Engel to get a feel for the legendary North Face, then after a few days of rest she joined forces with Aymeric Clouet to make an astoundingly fast, one day repeat of La Vida es Silbar. Established in 1998-99 by Daniel Anker and Stephan Siegrist, the 900m line up the Rote Fluh - the steepest section on the entire face - was freed in 2003 by Siegrist and Ueli Steck and first repeated by Roger Schaeli in 2016. After rockfall the crux pitch has been upped from 7c to 7c+

Swinging leads, Caprez and Clouet managed to repeat the route on their first attempt in a 20-hour push, with Clouet failing to repoint only 2 pitches and Caprez climbing all pitches free. The crux pitch and the upper 7b required multiple attempts. Due to the onset of darkness the duo opted against the final 6b and 6a pitches that would have led to the ridge, and instead abseiled off at 22:00 spending the night as planned at the bivouac below the Czech Pillar.

After the ascent Caprez stated "We had actually planned to climb the route in 2 days, but then the forecast for the second day wasn’t great. And since I managed to climb all the lower pitches free, we decided to try it in a day. Of course climbing the last two pitches would have been better, but we were more than happy with what we achieved, since otherwise the descent would have become far too dangerous. We opted to play it safe."

La vida es silbar was long considered the hardest alpine multi-pitch climb on the Eiger, the first modern alpine outing until Paciencia (8a) was established by Ueli Steck and Stephan Siegrist between 2001 and 2003. In August 2015 the bar was raised further with the first free ascent of Odyssee, redpointed by Roger Schaeli, Robert Jasper and Simon Gietl. The first one day redpoint of La vida es silbar was pulled off only recently by Roger Schaeli and Sean Villanueva. More on this story will follow in due course.

A dream of mine became true... « La vida es silbar » 900m/7c+ has always been on the top of my list. Climbing it all free in a single day on our first ground up go, was totally unexpected. 20 hours of effort with my friend and perfect partner for this kind of adventures @aymericclouet We went for the team free ascent, Aymerik was missing only two pitches to accomplish that mission, I was more lucky: Fixed draws on the lower pitches and tick markes made the big difference. I gave it all, except the final 6b and 6a pitch we skipped to reach the ridge, it was to dangerous at dark. We rappelled down at 22:00, lost our tag line and spent the night at the tscheque bivi. The route requires a solid climbing level but most important an enormous alpine know how. And like always on the big routes, it’s all about a balanced team, thanks so much @aymericclouet , you rock!!! Big respect to all the people opening routes on that face and everyone who climbs on them. #eigeradventure #lavidaessilbar #lovelife #helmetup #switzerland @arcteryx @petzl_official @scarpaspa @lyofood @msr_gear

18.09.2009
Eiger North Face, Japanese Diretissima freed by Jasper and Schäli
Robert Jasper from Germany and Roger Schäli from Switzerland have made the first free ascent of the famous "Japanese Diretissima" on the North Face of Eiger. The route now goes free at 8a and is a very serious alpine undertaking indeed.

25.06.2009
Stephan Siegrist frees Magic Mushroom on the Eiger North Face
Swiss climber Stephan Siegrist has made the first successful redpoint ascent of "Magic Mushroom" up the North Face of the Eiger. The route had been established in 2007 by Roger Schäli and Christoph Hainz and leads up the 3219 metres high mushroom in 21 pitches and now goes free at 7c+.