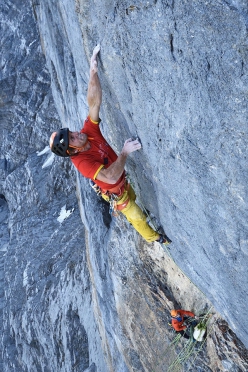 Roger Schaeli up the North Face of the Eiger, Airplane Mode
Photo by Robert Bösch 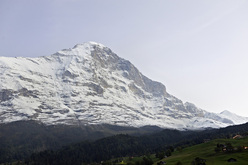 Swiss alpinist Roger Schaeli has made the first ascent of Airplane Mode up the North Face of the Eiger.

40-year-old Swiss alpinist Roger Schaeli has completed a new route up the North Face of the Eiger. Schaeli established Airplane Mode ground-up in the summers 2017 and 2018, with Dimitri Vogt, Bernd Rathmayr and Mayan Smith-Gobat.

Schaeli told planetmountain.com "the route climbs a line to the right of Deep Blue Sea along the eye-catching sun and shadow arête on the Geneva Pillar. Straight thought the huge bulge, where the climbing is absolutely awesome."

The 300 meter route offers "a good mix of trad & bolts… with the 40m crux pitch sports only two bolts, all the rest on relatively thin gear." Difficulties check in at around 8a+ and Schaeli plans to return in spring for the first one-day redpoint ascent.

Airplane Mode is Schaeli’s third addition to the North Face of the Eiger. In 2007 he completed Magic Mushroom together with Christoph Hainz, while in 2015 he teamed up with Robert Jasper e Simon Gietl to complete Odyssee.