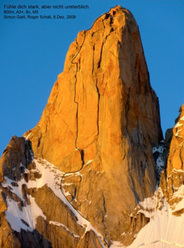 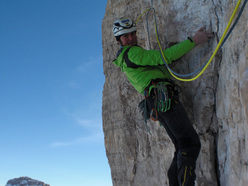 PORTFOLIO / gallery Portfolio: Simon Gietl, from the new route in Patagonia to the Phantom der Zinne

Simon Gietl, from the new route in Patagonia to the Phantom der Zinne

Even if spring is at the doorstep, it's worth analysing the climbs of Simon Gietl from the South Tyrol, who this winter carried out the first ascent in Patagonia together with Roger Schäli before repeating the famous Phantom der Zinner on the Tre Cime di Lavaredo, Dolomites together with Marc Artesi.

Feel strong but not immortal. This is the name of the new route on Aguja Poincenot and also perhaps the Leitmotif of Simon Gietl from the South Tyrol who, at the end of 2009, headed off to Patagonia to El Chalten and the Fitz Roy mountain chain together with Roger Schäli from Switzerland.

Immediately upon their arrival the two made a fast repeat of the classic Whillans route on Aguja Poincenot (3036m). Playing their cards as best possible against the infamous Patagonian weather (the worst summer in numerous years) the two mountain guides also managed to repeat the Californian route on Fitz Roy and the classic Franco-Argentine route, but their sights remain there, peeled to the Poincenot and the line they had glimpsed days earlier.

As soon as the weather let up they returned to the Whillans route, climbed this to circa half-height and then followed a series of 45° ramps to reach the headwall. Here they placed their tent – one pole tenuoulsy above the void – and from their "Hotel Chaos" they then spent 4 days forging a line to the summit. The duo aided up a 20m slab and this brought them to a series of cracks which led to the summit. Gietl summed the climb up succinctly: “the route is demanding and serious, climbed in good style.” Which in numbers translates to VII, A3, M5, 600m.

Back home in the Dolomites Gietl then turned his attention to the Tre Cime di Lavaredo; together with 18-year-old Marc Artesi he carried out a rare ascent between the end of the calendar winter and start spring of the famous "Phantom der Zinne", the route first ascended in 1995 by Christoph Hainz and Kurt Astner on Cima Grande graded 9+ (7c+). Three days after a repeat at the hands of 22-year-old Germans Reinhard Hones and Martin Schindele (who on 18 and 19 March needed two days, and therefore one bivvy on the Hasse – Brandler ledge) Gietl and Artesi skinned up to Cima Grande and reached the base of the route at 6.45am, ready for a fast and light ascent with only half a liter of water and some muesli bars. They set off at 7.00am and after aiding past the first two pitches they free climbed to the crux. This was overcome with the use of aid and at 14.30 they reached the massive ledge from where, like the Germans, they abseiled to the base where a quick ski descent brought them back to their car.