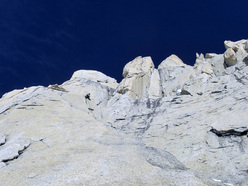 Simon Gietl and Roger Schaeli during the first ascent of Let's get wild (600m, 7a, 90°) on Aguja Guillaumet (2579m) in Patagonia
Photo by Gietl & Schaeli 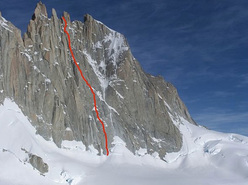 Let’s get wild, new route in Patagonia by Schaeli and Gietl

This December Roger Schaeli and Simon Gietl established Let's get wild (600m, 7a, 90°), their new route up Aguja Guillaumet (2579m) in Patagonia.

After their 2010 creation "Fühle dich Stark, aber nicht unsterblich", Roger Schaeli from Switzerland and Simon Gietl from Italy returned to Patagonia and have now established a new route up the East Face of Aguja Guillaumet in the Fitz Roy massif.

Their "Let’s get wild" was established over a two-day period: on the first day they climbed pitch one, on the second day they forged they rest of the way 600m up to the summit. The route takes a spectacular and exposed line of cracks to the right of The Gambler, established by Topher Donahue and Jared Ogden in 2001. The penultimate pitch climbs a drip of 90° ice and the route was climbed in beautiful style: free, on-sight, without any bolts at all and with difficulties up to 7a.

Gietl explained "We stood overjoyed on the summit of Aguja Guillaumet in the last light of day and realised that we had succeeded in doing what we had dreamt of and trained for so intensively. Climbing such a superb face on-sight, alpine style, without the use of a single bolt, is simply fantastic. The only blemish of "Let`s get Wild, 600m 7a / 90° Ice" is that the mighty, nearby king Fitz Roy makes everything else look relatively small. Had our first ascent been on Fitz Roy then it would be considered a milestone in alpinism. But what isn't, can perhaps become so in the future ;-)"