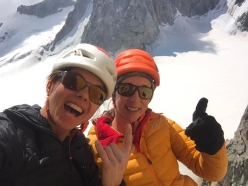 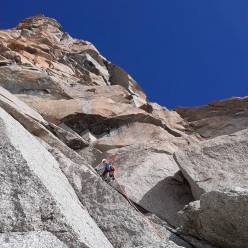 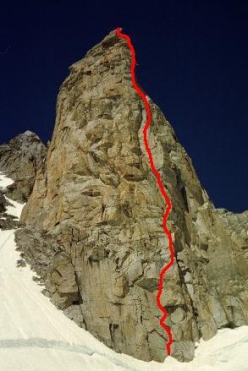 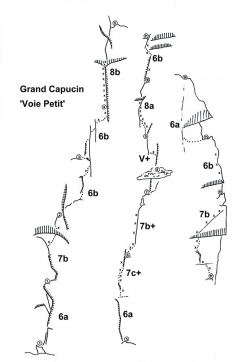 Swiss climber Nina Caprez has made a fast repeat of Voie Petit, up Grand Capucin (3838m), Mont Blanc. Established in 1997 by Arnaud Petit, Stephanie Bodet, Pascal Gaudin and Jean-Paul Petit, this 450m 8b multi-pitch was freed by Alexander Huber in 2005.

Switzerland’s Nina Caprez has made swift work of Voie Petit, one of the most difficult multi-pitch rock climbs in the Mont Blanc massif. Located on the emblematic Grand Capucin, the route was established on the mountain’s East Face by Arnaud Petit, Stephanie Bodet, Pascal Gaudin and Jean-Paul Petit in 1997, to the left of the Bonatti route, ie the first route up the emblematic tower established by Walter Bonatti and Luciano Ghigo in 1951. The first free ascent was carried out by Alexander Huber in summer 2005, past difficulties up to 8b.

Caprez attempted the route for the first time a week ago together with Sean Villanueva but strong winds, low clouds and snow forced them to bail after the main difficulties, just three pitches short of the summit.

For her second, successful run the 32-year-old returned with former Lead World Champion and mother of two Martina Cufar from Slovenia and required just 11 hours to climb the 12 pitches, sending the 8b crux first go but needing 2 attempts for the 7c+ and 6 for the next 7b+.

Digging deep into her inner resolve and reserves, she sent the 8a final hurdle first go before reaching the main summit at 3838m. The two rappelled quickly, with Caprez having led all the pitches free, and Cufar having climbed everything free on toprope except for the 8b, 8a and 7b+

In 2017 Caprez teamed up with Arnaud Petit to make the first ascent of L'or du temps, up the South Face of Grand Capucin.

11.09.2016
The Marin's Alps Project: one summer
The trailer of Edu Marin and his father Francisco Marin climbing one summer throughout the Alps, during which he repeated Orbayu 8c, Digital Crack 8a+, Voie Petit 8b and Samsara 8b+.