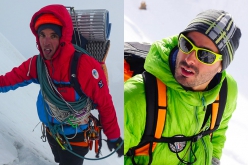 Max Bonniot (left) and Pierre Labbre (right) have perished on Aiguille du Plan in the Mont Blanc massif. The two were considered among the most talented mountaineers of their generation.
Photo by archive Groupe militaire de haute montagne 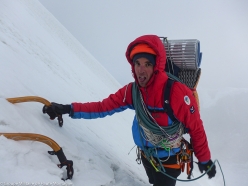 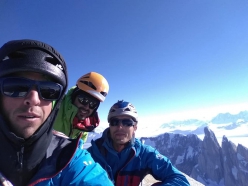 Léo Billon, Pierre Labbre and Max Bonniot on the summit of Fitz Roy in Patagonia after having climbed El Corazon
Photo by GMHM Chamonix 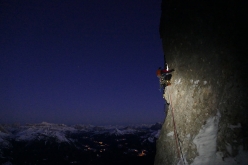 France’s Max Bonniot and Pierre Labbre have perished on Aiguille du Plan in the Mont Blanc massif. The two were considered among the most talented mountaineers of their generation.

Terrible news comes from the French side of Mont Blanc where the bodies of young mountaineers Max Bonniot and Pierre Labbre were discovered early this morning on Aiguille du Plan. The climbers were regarded as being two of the most talented alpinists of their generation.

According to the information published in Montagnes Magazine and Le Dauphine, the two had set off early yesterday morning to climb the Bonington route up Aiguille du Plan, but nothing was heard of them throughout the day. Early this morning a helicopter spotted the bodies at the base of the gully. It is assumed that they slipped while climbing together with a taught rope.

31-year-old Max Bonniot was a member of France’s elite Groupe militaire de haute montagne (GMHM) military corps, while 38-year-old Pierre Labbre was a mountain guide working for the Compagnie de guides de Chamonix Mont Blanc. Those who follow mountaineering chronicles will often have read news of their ascents, which ranged from the Alps to Nepal, from Norway to Peru and Patagonia.

In 2012 Labbre for example established a new route on Latok II, and followed this up in 2013 with a new route on the unclimbed south face of Gauri Shankar (7134m) in the Rolwaling Himal. He returned to Nepal in 2015 and forged a stunning direttissima up Dazampa Tse. Bonniot, too, established new climbs in Nepal, such as the line up Pangbuk North in 2017, while in Peru he breached the virgin East Face in Siula Grande in 2016. Closer to home, in 2018 he made a rare winter ascent of the Solleder - Lettenbauer route up the NW Face of Civetta in the Dolomites. Early this year Bonniot and Labbre joined forces with Léo Billon and in Patagonia climbed both Fitz Roy and Cerro Torre, the latter up the SE Ridge, more commonly referred to as the Compressor Route. In short, once again the climbing community mourns the loss of another two world-class mountaineers.

01.03.2018
Huge Fosslimonster icefall repeated in Norway by French alpinists
Fosslimonster at Gudvangen, reputed to be one of the longest and most beautiful ice climbs not just in Norway, has been repeated by a flurry of French alpinists including Pierre Labbre, Max Bonniot and Léo Billon. The video of what are quite possibly the first repeats since the route was established in 2009 by Robert Jasper and Roger Schäli.

03.01.2018
Dolomites: French winter ascent of Civetta Solleder climb
Winter mountaineering: an interview with French alpinist Max Bonniot after his repeat of the historic Solleder - Lettenbauer climb up the North-West Face of Mt. Civetta in the Dolomites, carried out together with Léo Billon and Benjamin Védrines from 22 - 25 December 2017.

24.11.2017
Pangbuk North, video of the French route in Nepal
The video of Tolerance Zero, the new climb established by French alpinists Max Bonniot and Pierre Sancier up the North Face of Pangbuk North (6589 m) in Nepal.