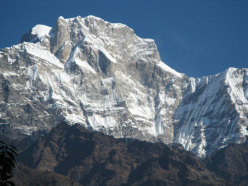 Gauri Shankar, first ascent of the south face by the Pamalade team

On 23 October the French alpinists Mathieu Détrie, Mathieu Maynadier, Pierre Labbre and Jérôme Para made the first ascent of the virgin south Face of Gauri Shankar (7134m) in the Rolwaling Himal, located on the border between Nepal and Tibet.

A French team has made a great ascent up the beautiful South Face of Gauri Shankar which, at 7134m, stands as the second highest peak in the Rolwaling Himal. On Wednesday 23 October Mathieu Détrie, Mathieu Maynadier, Pierre Labbre and Jérôme Para successfully summited via a new route up the imposing and hitherto unclimbed South Face. This enormous, difficult face had also been attempted in 2011 by Stefan Glowacz and David Göttler who had been forced to abandon their expedition due to continuous bad weather.

Beyond being the first ascent of the south face, this was the fourth ascent of the mountain, after the first in 1979 by the American John Roskelley and the Nepalese Dorje Sherpa who climbed the west face. Then in 1984 the SW face was climbed by Wyman Culbreth and Ang Kami Sherpa, and then in January 1986 the mountain was climbed by the South Korean Choi Han-Jo and Ang Kami Sherpa.

The French expedition had arrived at Base Camp on 23 September. After the necessary acclimatisation, they waited for a suitable window of good weather for the climb to the summit. October 17th looked promising, but then the weather worsened again at the weekend and the climbers feared the worst. They had dismantled their camp and were resigned to setting off down the mountain.

But things didn’t work out this way. The news of an unexpected opening in the weather changed their plans once again, and they made sure they were ready. On Monday 21st, with just a week of the time available to them remaining, they set off and on the morning of Wednesday 23 October, after a real tour de force, the reached the well-earned windy summit shortly before 16:00. After less than an hour they were already descending again. The descent route is (never) easy but on Thursday 24th the first two arrived back to Advanced Base Camp, followed shortly afterwards by the other two. Now they are all at Kathmandu, about 100 km from the mountain.