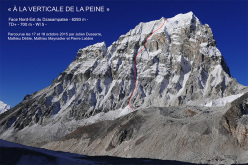 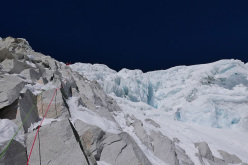 On the 15th of September Mathieu Détrie, Julien Dusserre, Pierre Labbre and Mathieu Maynadier left France with the aim of climbing a new route on the South Face of Nangpai Gossum II, a 7350m peak in the the Nangpai Gossum group in Nepal's Himalaya.

The four French alpinists reached Base Camp on 30 September but conditions were far too dry for their planned objective. "Immediately we knew the climb on this line would not be possible because due to poor ice and rock fall" Maynadier told planetmountain.com, and the team then opted for plan B, a new line on Nangpai Gossum III. Having sat out bad weather in base camp for 10 days, on the 16th of October Labbre and Maynadier headed to the SE Face of the mountain and spent the night at the Bergschrund, poised for an ascent the following day. However, the next morning the weather was worse than expected and they returned to Base Camp.

Not wishing to return home empty-handed, on that same day Detrie and Dusserre forged a new route up the NE Face of Mt. Dazampa Tse, the 6293m summit located in front of the Nangpai Gossum group. The new 700m line offers difficulties up to TD+  WI5 and according to the Frenchmen the climbing is comparable to that on the North Face of Les Droites in the Mont Blanc massif. Labbre and Maynadier repeated À la verticale de la peine the following day, on Sunday 18 October. "It’s a nice mixed line" explained Maynadier, adding "and it saved our trip a little..."

Dazampa Tse was first climbed on 18 October 2004 by the Slovenians Tadej Golob and Urban Azman, in an expedition led by Urban Golob, via their route Mali prince (TD+, M5+, 650m) up the SW Face.