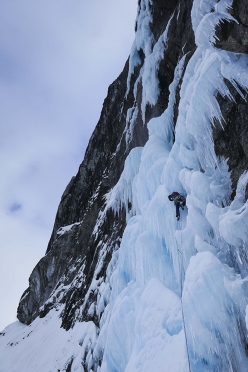 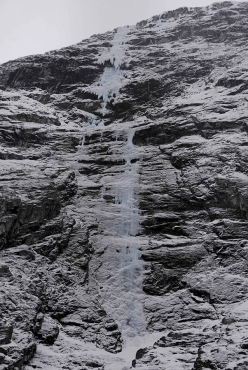 The icefall Fosslimonster at Gudvangen in Norway, established in 2009 by Robert Jasper and Roger Schäli after a first attempt by Jasper and Markus Stofer
Photo by GMHM

Fosslimonster at Gudvangen, reputed to be one of the longest and most beautiful ice climbs not just in Norway, has been repeated by a flurry of French alpinists including Pierre Labbre, Max Bonniot and Léo Billon. The video of what are quite possibly the first repeats since the route was established in 2009 by Robert Jasper and Roger Schäli.

A group of French GMHM alpinists has just returned from a successful 6-day trip to Norway, where on the 13th of February  Pierre Labbre, Max Bonniot and Léo Billon made what might well be the first repeat of Fosslimonster, the stunning icefall at Gudvangen first ascended in 2009 by Robert Jasper and Roger Schäli. Making the most of conditions, ENSA teachers Aymeric Clouet, Philippe Batoux and Michel Coranotte repeated the line the next day, while Frederic Gentet (Groupe excellence alpinisme national coach) and young GEAN members Octave Garbolino and Antoine Avenas repeated the route on the 15th.

Back in 2009 Fosslimonster was hailed as one of the most extraordinary and longest icefalls in the world. The Norwegian Alpine Club however harshly criticised the first ascent, stating that it "did not meet the Norwegian standards of climbing in good style" as it contained bolts at the belays and bolts and pegs on the pitches (9 bolts for the belays, 5 on the pitches plus three pegs and an in-situ stopper).

Asked about these polemics from nearly a decade years ago, Bonniot told planetmountain.com:  "Other ice falls had been bolted in the area before Fosslimonster was ascended and these didn’t result in any open criticism. For me, even with the bolts (10 meters bolted in the first mixed pitch for 600 m of climbing) this route remains an adventurous undertaking. This is one of the most beautiful ice climbs in the world and, in my opinion, these few bolts have not killed its adventurous aspect. Futhermore, I really enjoyed following in the footsteps of Jasper and Schaeli and I'd also like to thank them for their topos and photos of the route."

11.03.2009
The Norwegian Alpine Club and the ethics for climbing in Norway
With reference to the latest ascents by Robert Jasper in Norway, the Norsk Tindeklub (Norwegian Alpine Club) has now published an official statement guidelining climbing ethics in Norway. The German climber also provides his point of view.