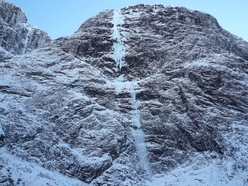 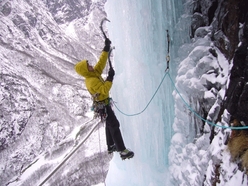 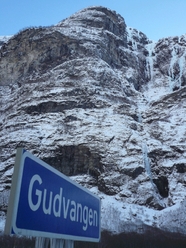 Norway. Into the Wild.
Photo by archive Jasper / Stofer / Schaeli 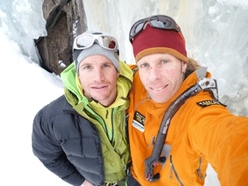 Everyone knows the ice climbing in Norway is hard to beat. Few know this better than ice climbing specialist Robert Japser from Germany, who on a trip in 1999 caught sight of a couple of ice lines which remained elusively etched in his mind until this unusally long, cold and abundant winter. In February he travelled twice to Norway to realise his dream, which materialised as three massive new ice falls. His report is published below.

At the start of February I travelled to Norway to go ice climbing with Markus Stofer from Switzerland. In 1999 I had discovered big waterfalls close to Gudvangen (Aurland) in Naeroydalen and these are probably some of the highest in the world. The problem though is that conditions so close to the sea are really bad for ice climbing. The mild Gulf-stream and the prevailing westerly winds usually hinder the massive masses of water from freezing as they tumble down the El-Cap sized faces into the Fjord. But this year the unusually long cold spell with temperatures down to –30°C resulted in the whole of Norway freezing over. This was the chance that we ice climbers simply couldn't miss.

At Gudvangen we completed what is possibly one of the longest icefalls in the world, "Into the wild" WI 6X, 900m height difference and almost 1300m long. We then travelled to Eidfjord, where the classic 180m WI6 Vöringsfossen awaited us, before making the first ascent of "Landeplage"“ on the South Face of Mabodalen: WI 7-, 240m of fantastic mixed climbing up a free standing drip. Just a year ago a Canadian team had been active here and we were enthusiastic to climb routes between WI5 - WI6+. According to a few local Norwegian ice climbers it's difficult to be certain as to whether mid-grade routes have already been first ascended or not. There are numerous good ice climbers in Norway and the land of big waterfalls and uncountable climbing possibilities has grown in popularity for ice climbers worldwide. Nevertheless we almost always climbed alone and the spirit of adventure is much bigger here than in the Alps.

Back in Gudvangen we dared to climb the most obvious icefall in the entire Naeroydalen. Initially the ice had seemed very thin, now though it seemed to have got slightly thicker. We decided to check it out and climbed up the first 300m. The ice was like glass but just thick enough. So we rebooked our flight to attempt the route two days later. The mixed section in the middle slowed us down, in temperatures around -10°C the ice was even more transparent than the day before. We climbed another two pitches into the dark at circa 2/3 height, but were then forced to admit that we stood no chance against the steep icefall at night. We abseiled down our frozen ropes, depressed. The "Monster Fossil" had won.

Back at home though I simply couldn't get the Monster out of my head. After the ice event on the weekend the time had come. I really wanted to live out my dream and climb the wildest icefall in my life. I was lucky: Rocker Schäli from Switzerland immediatly agreed to join me and we flew back to Noway. We arrived in Gudvangen a day later than planned due to lost baggage, problems at the Duties with our climbing gear and a driver who decided to ignore our right of way. But we got there and at 4.00am the next morning we reached at the start, highly motivated.

It was much warmer, roughly zero degrees, so just the right day. After a difficult battle we finally managed the highly desired first ascent of "Fosslimonster" M8+, WI6+, 800m height difference, circa. 1000m in total. In doing so we managed to make first ascents of two of the tallest icefalls in the world. A big dream has come true, because it's unlikely that I'll find such an icefall, such a perfectly frozen line of water ever again. On the next day it began to thaw seriously.

These are the longest ice climbs I know with these difficulties, absolutely extreme. They represent a complete union of our sport, modern ice and mixed climbing, a new step forward in terms of length, an enormous adventure. And this is what it's all about!


Norway first ascents
Into the wild - Gudvangen, (Aurland) Naeroydalen
One of the longest ice climbs in the world.
Grade: WI 6X, E5
Length: 900m height difference ca. 1300m length
First ascent: on-sight on 3 February Robert Jasper & Markus Stofer.
Location: From Gudvangen drive up Naeroydalen towards Voss to just after the road sign Gudvangen. The icefall can be seen on the left. Approach from the petrol station at Gudvangen on the left-hand side of the river.
Gear: ice climbing gear, 60m ropes.
Descent: Abseil stations in-situ to 3rd pitch, higher up abseil off bushes and Abalakov

Fosslimonster - Gudvangen, (Aurland) Naeroydalen
One of the most extraordinary and longest icefalls in the world. Calculate 12.5 hours to climb this route.
Grade: M8+, WI6+, E5
Length: 800m height difference, ca.1000m length.
First ascent: redpoint 19 February, Robert Jasper & Roger Schäli after 2 day attempt at the start of February by R. Jasper and M. Stofer.
Location: From Gudvangen drive up Naeroydalen towards Voss. Park just before the turn off for Nasen (quarry on the right). The icefall is located right next to the road on the left.
Gear: ice climbing gear, 60m ropes., Friends 0.5- 2.5 and 3.5, set of nuts
Descent: Abseil stations in-situ to 9th pitch, higher up abseil off Abalakov