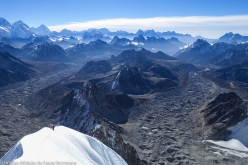 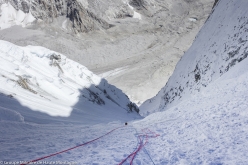 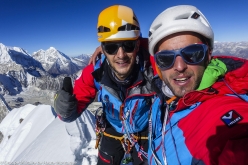 Max Bonniot and Pierre Sancier on the summit of Pangbuk North (6589 m), Nepal, after having made the first ascent of Tolérance Zero up the mountain's North Face (18-19/10/2017)
Photo by Groupe militaire de haute montagne Chamonix 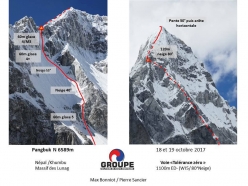 Mountaineering in the Himalayas: in the Lunag Massif (Khumbu region) the French mountaineers Max Bonniot and Pierre Sancier have climbed Tolérance Zero, a new 1100m route described as elegant, logical and technical up the North Face of Pangbuk North (6589 m).

In mid-October French mountaineers Max Bonniot and Pierre Sancier peered out onto Everest, Cho Oyu, Lhotse and Makalu to make the first ascent of Tolérance Zero, a 1100 m high mixed climb up Pangbuk North, the 6589 m peak in the northwestern region of Khumbu in Nepal also referred to as Jobo Le Coultre.

The initial aim of the French expedition was to ascend virgin Lunag Ri, a 6907 m peak attempted in 2015 by Austria’s David Lama and America’s Conrad Anker. After establishing base camp at 5100 meters, the mountaineers realised though that the mountain was not in ideal conditions, hence they opted for "plan B", namely the North Face of Pangbuk North.

Bonniot and Sancier crossed the Bergschrund at 5 am on the 18th of October and started their ascent, past difficulties estimated at ED, WI5, 80°. Before night fell they fixed one pitch then descended to the exposed col at circa 6150 meters, where they bivouacked for the night. The next morning they ascended the fixed rope and after "crossing a beautiful snow crest" they reached the summit at 9am.

The new route is described as "élégante, logique et technique" and the French climb is only the second, perhaps the third, ascent of the mountain. In 2013 the Americans Christopher Wright and Scott Adamson forged their Purgation (VI WI6 + M6 1100m) up the NE Face of the mountain, while the first ascent, attributed to a 2009 international team led by Switzerland’s Stéphane Schaffer, has been questioned by some.