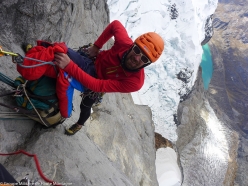 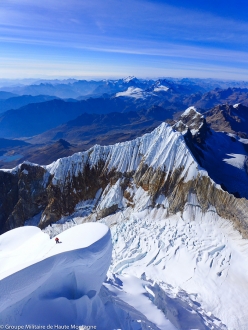 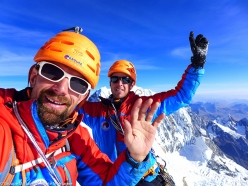 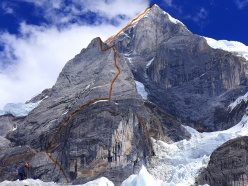 An important new route has been established on a mountain in Peru that has a huge appeal in the mountaineering world: Siula Grande in the Cordillera Huayhuash. First ascended via the north ridge in 1936 by the Austrians Erwin Schneider and Arnold Awerzger, this 6344m high peak was made famous by the dramatic turn of events that took place in 1985 when the mountain was climbed by Britain's Joe Simpson and Simon Yates, later documented in the book and film 'Touching the Void'.

At the time Simpson and Yates climbed the West Face and made their harrowing descent down the North Ridge, while this summer the talented French alpinists and members of Groupe Militaire de Haute Montagne Max Bonniot and Didier Jourdain targeted the mountain’s East Face.

With base camp at Laguna Siula, an initial attempt was scuppered due to onset of bad weather. On 24 August the Frenchmen finally launched up the East Pillar, climbing this huge buttress that protects the upper reaches of the mountain with two bivouacs. Dubbed "Facette Est", this Pillar is certainly no mean task as its summit reaches a highly respectable altitude of 5700m. Climbing free up to 6c, they reached the Pillar's highest point and then dropped down the other side via 100m of abseils to "open the doors to the great SE Ridge of Siula Grande."

The weather forecast predicted an upcoming storm in the next few days and this is why they continued upwards almost immediately, with only a minimal mountain of gear, along the 750m high, 70° ridge. The climbing proved laborious and extremely physical and at 23:00 they settled down for their third night on the face in an "ideal bivouac, cut out of a crevasse, perched at 6200m."

Concerned about the weather, on Saturday 27 August the two continued climbing early at reached the 6344m summit at 8:00. "The summit euphoria made my smile freeze, being together up there was emotional. The ambient was idyllic, not a breath of wind, you could not ask for more" explained Bonniot , adding " It felt small and isolated because of the long descent, and the Bergschund 1400m down below looked even more distant! But that's exactly what we searched for on this still unexplored face."

After another bivouac the descent, contrary to that of the British mountaineers 31 years ago, ran smoothly and at about 14:00 on Sunday 28 August Jourdain and Bonniot safely set foot on the glacier.

The new route is called Le bruit des glaçons, is 1400m high and breaches 750m of rock climbing up to 6c, and 750m of snow and ice up to 70°. It was climbed in alpine style over five days, without placing any bolts.

RELATED NEWS
09/06/2016 - Touching the void - immortal stories
Touching the void by Kevin Macdonald recounts the dramatic and immortal story of Joe Simpson and Simon Yates and their first ascent of the West Face of Siula Grande (Andes, Peru). A film and a story about the greatness of friendship and life.