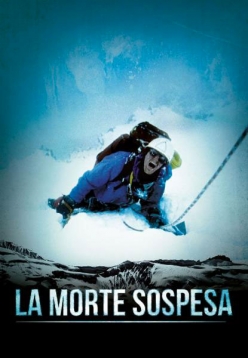 PlayAlpinismo films: Touching the void by Kevin Macdonald recounts the dramatic and immortal story of Joe Simpson and Simon Yates and their first ascent of the West Face of Siula Grande (Andes, Peru). A film and a story about the greatness of friendship and life. The review by Vinicio Stefanello.

Some stories are immortal. Destined to be told by word of mouth, recounted forever. They are, in the truest sense of the word, epic. They talk about heroes, myths and legends. Draw on the imagination and, at the same time, serve to help us comprehend our life, our own reality. Yet sometimes - as is well known - reality and life itself prove so unimaginable and dramatic that they surpass even the wildest fantasies and, in doing so, they become legendary. The real story, told in Touching the Void, is one of these. It’s not simply about a dramatic turn of events, but also about a resurrection. Not merely an adventure that exceeds reality, but also a complete upheaval of one of the cornerstones of mountaineering rhetoric: here the indissoluble bond formed in a climbing partnership is broken. So much so that the rope that binds the two main characters becomes the very symbol of defeat and, at the same time, rebirth. Because sometimes, as in this case, that bond exceeds all physicalities and choices and is present, indeed it is even more present, even after having been broken. And on closer inspection that, when it occurs, is what makes mountaineering and life great.

We're talking,quite clearly, about what really happened to the British mountaineers Joe Simpson and Simon Yates on Siula Grande, the remote and fascinating 6536m high mountain in the Peruvian Andes. The year was 1985, and the two alpinists were there to climb its difficult and dangerous West Face. Theirs was an enormous and ambitious project, so much so that, although attempted several times previously, it had remained unclimbed. The climbers were armed with the strength and boldness of youth (Joe was 25 at the time, Simon was 21), which combined with the experience they had gained on difficult Scottish gullies and on large mountain faces in the Alps. In addition, they were influenced by that particular style of climbing that made the British mountaineers of that era approach the mountains without compromises. It is no coincidence therefore that they embarked on this adventure on their own. And it was only due to a chance encounter that Richard Hawking, a youngster just like them but with no mountaineering experience to speak of, accompanied them to Base Camp.

From there, from beautiful Base Camp with its pristine lake just for them, the West Face of Siula Grande lay about 8 kilometers away. In short, they couldn't even see it. And they were completely alone in this boundless region. Climbing mountains about which they knew little or nothing. But this is true mountaineering! Or rather, the form of adventurous mountaineering that was, for both of them, their raison d'être. And so they set off, fully aware of the fact that they might never return. They tackled the face. Confronted the panic of failure. Risked everything, perhaps even beyond the limits of what is possible. And bivouacked in extremely difficult conditions, through a raging storm. Then, almost unexpectedly, the summit.

Real victory, and true joy, was barred by the uncertainty of descent, down through an absolute unknown once again. They didn’t know the line of descent. Could not know it. Remember? They were alone on an unknown peak, lost in the immense sea of mountains. And so they were forced to make decisions. The essence of mountaineering is always based on decision-making, for which one must always bear the consequences and responsibilities. The truth of this would become apparent to both of them later on. In the meantime they got lost. Discovered the route again. And just when they thought they’de almost done it, the unthinkable happened. Joe broke a leg… and it is precisely at this point that the story begins that no one will ever forget.

In those conditions and in that location, Joe knew for certain that he was dead. No one, not even Simon, could save it. Indeed Simon, Joe believed, could do nothing else but abandon him. But instead, a miracle occurred (and the first resurrection). Simon devised a technique, as desperate and cruel as it was effective, to lower Joe. It almost seemed as if they would succeed... But it was then that Joe experienced his second "death". The inevitable happened, the choice that no mountaineer and man would ever wish to face. That of "your life or mine" In short, it was the start of a true drama. Of Joe’s many deaths and resurrections. Of Simon’s anguish. An ordeal that seems utterly devoid of any redemption whatsoever.

I will stop here. Although Touching the Void, the book written by Joe Simpson to tell this story, is a best seller, and although many already know the end, I won’t continue. Because I would like to invite you to watch the film, directed in 2003 by Oscar-winning filmmaker Kevin Macdonald. Not only because it’s a great film but also because Touching the Void is, truly, an immortal story. One of those that need to be remembered, told, seen and seen again. One of those that remind and teach us to be human beings through and through, beyond the myth.

Watch Touching the void and hundreds of other films free of chargefor 30 days by registering at this link:
TRY PLAYALPINISMO FREE OF CHARGE FOR 30 DAYS

PlayAlpinismo - GazzaPlay reviews:
> The Man Who Skied Down Everest, Yuichiro Miura and that first ski descent on Everest
> Nanga Parbat - the film about Reinhold Messner, Günther Messner and choices