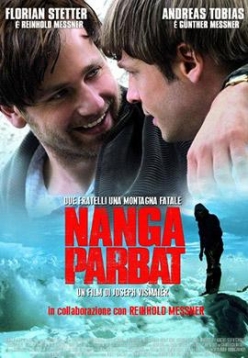 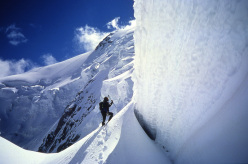 PlayAlpinismo films: Nanga Parbat by Joseph Vilsmaier is the story of Reinhold and Günther Messner, of their great first ascent of the Nanga Parbat Rupal Face, of a tragedy and how a mountain can mark someone's destiny. The film review by Vinicio Stefanello.

There is a certain point beyond which nothing will ever be as it was before. Nanga Parbat- the film by Joseph Vilsmaier that retraces (in fiction) one of Reinhold Messner’s most amazing feats and, at the same time, the achievement that caused him the greatest heartache, namely the loss of his brother Günther - talks about this point of no return. About how mountaineering, and also life in general, can be marked forever by a decision which, inevitably, is interwoven with an unfathomable fate. It is a great story about a mountain and about life in general. Better still, it is a story of extraordinary mountaineering on a mythical mountain. On Nanga Parbat, the biggest mountain in the Himalayan Karakoram, the peak regarded as one of the most symbolic mountains of all, laden with meaning and shrouded in legends. So much so that for the Germans, Nanga Parbat is called "Mount Doom". While for Reinhold Messner, it is the mountain that shapes his very own "destiny", that one that will mark him forever.

It all began, or rather, the point of no return we were talking about, was reached in 1970. On June 27, 1970, to be precise. On that day Reinhold should have summited Nanga Parbat alone. But he didn’t. Günther, his brother, had followed him of his own accord and joined up with Reinhold just below the summit. They were climbing without a rope and without bivouac equipment. An absolute "folly", they both knew it. They were passing their personal Pillars of Hercules. They reached the summit, having completed the first ascent of the mammoth Rupal Face, making only the third ever ascent of Nanga Parbat in the process. A totally extreme undertaking which, in due course, would turn into tragedy.

All alpinists know what happened next. An inexplicable odyssey, for which words fails. Suffice to say that another two days were needed before Reinhold returned to life at the base of the mountain. But he was alone. He and Günther had made an impossible decision, the only one they could take under those conditions. They had descended down the unknown Diamir Face. In doing so they had also carried out the first traverse of an eight-thousander. An achievement in its own right, within the overall achievement which the Nanga Parbat undertaking represented. An incredible feat. But Reinhold was alone, more dead than alive, broken by the death of his brother, and no one could help him…

Let's stop here. The film should be seen and experienced. Especially because in the film these intense and tragic moments weave between what happened before and what happened after. It shows the Messner brothers as young children. It highlights the strong persona - by no means "easy" - that the elder brother Reinhold immediately demonstrated. Brings to the forefront Reinhold’s way of being, so different, going against the rules. His love for the mountains. The first big climbs in the Dolomites together with Günther. His visionary self, in perpetual conflict with parental authority. And also, and in a different manner, against the mountaineering establishment, represented in the film by Nanga Parbat expedition leader Karl Maria Herrligkoffer.

And then the arguments with the other expedition members. The subsequent controversy about what really happened up there. The accusations of having abandoned his brother. And, last but not least, the mother figure... and that impalpable “feeling of guilt." All of this leads to that point, the culmination, from where there is no turning back and which is, always, impossible to accept fully. It’s a great and riveting mountaineering story. But it is also "universal", because the film also talks about the decisions that one must always make, and the need to be aware of the consequences that come with them. It talks about the continuous search for a difficult and at times impossible balance. It is that same "impossible" balance that Reinhold Messner, through his own mountaineering, has always explored and taken to the point of no return, assuming responsibility for his own actions. Nanga Parbat is worth watching for these reasons, too, because it talks about an alpinism which, with its light and shadows, helps us to defeat the "destiny" that may otherwise crush us.

NEWS PLAYALPINISMO
01/04/2016 - The Man Who Skied Down Everest, Yuichiro Miura and that first ski descent on Everest

25/01/2004 - Nanga Parbat 1970. Reinhold Messner told the truth
Günther Messner really did perish during the descent of the Nanga Parbat Diamir Face, as his brother Reinhold has always sustained.