► News ► Snow-ski-skimountaineering ► The Man Who Skied Down Everest, Yuichiro Miura and that first ski descent on Everest
Versione italiana 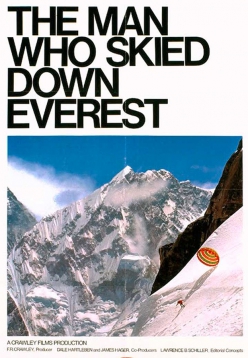 Yuichiro Miura, The Man Who Skied Down Everest
Photo by archivio GazzaPlay - PlayAlpinismo

PORTFOLIO / gallery Portfolio: The Man Who Skied Down Everest, Yuichiro Miura and that first ski descent on Everest

The Man Who Skied Down Everest, Yuichiro Miura and that first ski descent on Everest

PlayAlpinismo film channel: The Man Who Skied Down Everest, the 1976 best documentary Oscar winning film that recounts the incredible story of Yuichiro Miura and the first time man skied on Everest. A step back in time that portrays the essence of adventure, but also displays mountaineering as a vision and a discovery of personal limits. The film review by Vinicio Stefanello.

They know that feeling well, all alpinists and freeriders do. That moment, suspended between the past and future. Within an instant, nothing will ever be as it was before. May 6, 1970, a man is located at the South Col of Everest, at an altitude of 8000 meters. His feet are strapped to a pair of skis, on his back sits a parachute. Below him lies the void. A "slide", 40/45° steep, that leads straight into the abyss, a crevasse, poised to swallow him forever. The two are separated by 2400 meters of snow but, above all, treacherous slabs of ice and jutting rocks as high as buildings. It’s a challenge, better still, an absolutely crazy idea: no one knows how it might end.

That man is Yuichiro Miura, he’s a 37-year-old Japanese mountaineer, and this is the first time someone is about to attempt to ski Mount Everest. Let’s concentrate on that moment. Yuichiro is there, this very moment. After months of careful preparation. Training. Sacrifices, dreams and even nightmares. He’s up there, after a three-month expedition that cost the lives of six Sherpa. He’s ready and has to decided whether to raise the bar, push the limit that leads to action. No one can help him now. Perhaps it is in precisely this moment, this instant before setting off, that one can begin to gather, possibly even understand, the insanity and grandeur of Miura's vision. And it is that moment, but also how that moment came into being, that encompasses all the beauty and meaning of The Man Who Skied Down Everest, the film that documents the story of that first time on skis on Everest. A must-see film, directed by Bruce Nyznik and Lawrence Schiller, that unsurprisingly won the Oscar for best documentary feature in 1976.

Yuichiro Miura really does launch himself into the unknown. His incredible and dramatic descent at 160 km/h lasts just over two minutes. Like a deep, eternal breath that encompasses a lifetime. An instant that comprises everything that came before and, in part, what is yet to come. It is for this reason that The Man Who Skied Down Everest cannot avoid retracing that slow approach towards the fatal moment, interlacing Miura’s vision and personal life with that of the enormous expedition that set off from Kathmandu in order to reach the foot of Mt. Everest. Almost 300 kilometers covered on foot, 800 Nepalese porters hired, 27 tons of equipment transported on their shoulders including the bulky film cameras used to make the documentary. A story, but also a Nepal and an Everest, of former days. This is a film that leads back into a different era. When little was known about high altitude mountaineering, and climbing Everest was like "flying to the moon." Proof of this is the short and intense encounter (one of the film’s highlights) Miura has with Edmund Hillary, the first to set foot on the highest mountain in the world along with Tenzing Norgay in 1953. And proof can also be found in the fact that Miura’s ski adventure took place eight years prior to the first ascent of Everest without supplementary oxygen, carried out by Reinhold Messner and Peter Habeler. And then there are the skis, ski boots and all the other equipment… almost prehistoric.

This historical perspective, this chance to examine a world that no longer exists, represents one of the most interesting aspects of this film. As does the tragedy of the six Sherpas, who perish while fixing the Ice Fall. A catastrophe that anticipates and reflects a current situation that is becoming increasingly problematic. Above all though, The Man Who Skied Down Everest is a great story that tells - with outstandingly beautiful images - the essence (or perhaps obsession) of mountaineers and the limits they attempt to overcome. "Was it a victory or a defeat?" is what Yuichiro Miura asks himself at the end. There is, of course, no right answer. What is certain though is that his own journey continues relentlessly. Aged 80, on 23 May 2013, he successfully summited Everest for the third time, having previously done so in 2003 aged 70, and then again in 2008, aged 75. In other words: the journey of the man that skied Everest is never ending.