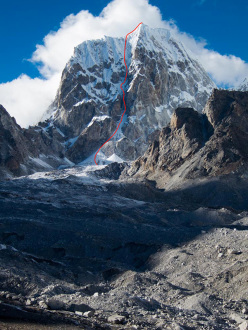 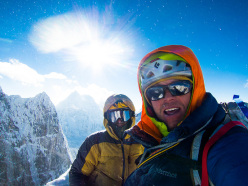 Chris Wright and Scott Adamson on the summit of Pangbuk North, 10/2013
Photo by Chris Wright

Inspired by the climbs of David Gottlieb and the late Joe Puryear, American alpinists Scott Adamson and Christopher Wright spent a month in the northwest corner of the Khumbu, more precisely the Lunag Glacier, where they managed to make the first ascents of two 6,500m peaks via what they describe as "some pretty interesting routes", namely Open Fire (V WI5 M3 1000m) up Lunag West and Purgation (VI WI6+ M6 1100m) up Pangbuk North.

Wright and Adamson arrived in Nepal at the end of September and established their basecamp at 5050m on 10 October and they were joined at Basecamp by David Gottlieb and Chad Kellogg who would attempt, unsuccessfully, the virgin peak Lunag Ri. Wright and Adamson had their sights set on a different mountain though, namely the SE Face of Lunag West. "There are a lot of good looking lines, and bigger lines" Wright explained "but there aren't that many more obvious or prettier lines. The mountain really only has one obvious weakness on the Nepali side, and that's the couloir that splits the SE face from the glacier to the summit ridge."

After acclimatising briefly on nearby Peak 5777m and setting up ABC, the two finally set off on 22 October. Easy mixed terrain and snow led to a circa 100m vertical to overhanging ice flow at 7:00, just as the sun began to creep onto it. Taking their chances and climbing fast they managed to avoid falling rock and exit onto the upper icefield. 70-80 degree snow and ice led to the ridge where they were greeted by a stiff, cold wind. With night falling and tiredness setting in, they sheltered in a crevasse, brewed up and rested for a couple of hours before continuing on to the summit, which they reached at around 11:45pm. They immediately started the descent, down climbing to the ridge and abseiling off threads and rock anchors to reach the glacier at around 5am and ABC at 6:30am. Wright summed up this 26 hour round trip camp-to-camp as a "nice climb, only a few hard pitches, but still a little bit harder overall than we were expecting."

After a week's rest the duo then headed to the NE Face of Pangbuk North. Wright had attempted this peak the year previously and after setting off early they climbed easy ice to reach the first cliff band. Climbing in very high winds and blasted by spindrift, they breached moderate ice and mixed terrain (WI4 M4) to reach the first crux, a pitch of M6 rock and rotten vertical ice. This was followed by another committing pitch, described by Wright as "honestly one of the most terrifying things I've ever done" and another long WI5 pitch which led to a a snowy 50 degree ledge, where they hacked out a platform and set up the tent. After a short and uncomfortable night they left at 8:30 am, up 70-80 degree ice and neve with short steeper steps. They then simul-climbed to reach the flutings near the summit, then battled hard up steep, collapsing snow to reach the summit at around 4 pm. Describing this as knife-edge is somewhat of an understatement: Adamson had led the final pitch and had hung his pack off the overhanging south side to counterbalance his belaying Christopher up the north… It was a beautiful day with beautiful views, albeit windy and cold, and after the ritual summit photos they abseiled to the bivy, spent the night there and then descended the next day. Wright commented "A little like the other route, there were only a few really savage pitches, but that one was really hard, and the overall effort was decently big."

It is worth noting that the first ascent of Pangbuk North is disputed. While the first ascent was claimed in 2009 by an international team led by Switzerland's Stéphane Schaffter and subsequently named peak Jobo LeCoultre, imprecise ascent details and a lack of convincing photos have led many people, including Adamson and Wright, to believe that the summit was not reached. Wrightconcluded "Neither of the routes we did nor the first ascent of the other peak are in dispute and since they're fine lines, I'd certainly like to focus on what we definitely achieved, instead of what perhaps wasn't."