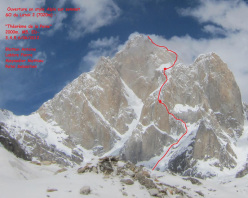 The four alpinists needed four days, from 3 to 6 June, to ascend and descend their Théorême de la Peine which ascends for 2000m with difficulties up to M5 and an overall grade of ED-. With these numbers it's superfluous to say that this ascent has all the right attributes to be a super ascent worth underlining. In due course we hope to provide more information.


Latok II
Circa 7020m high, Latok II was first ascended in 1977 via the south face by the Italians Ezio Alimonta, Toni Masè and Renato Valentini during an expedition led by Don Arturo Bergamaschi.