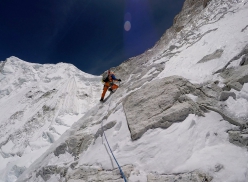 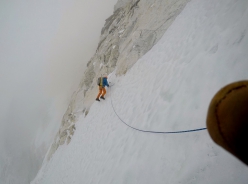 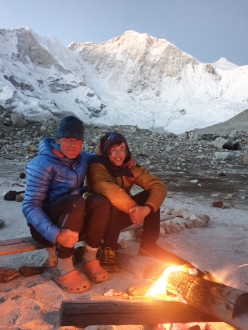 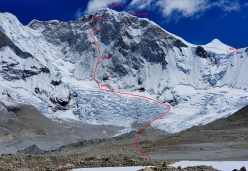 Czech alpinist Márek Holeček reports about Heavenly Trap, the new route climbed alpine style over 10 days up the West Face of Baruntse (7129m) in Nepal together with Radoslav Groh.

From 21 to 30 May the two Czech alpinists Márek Holeček and Radoslav Groh forged a new route up the West Face of Baruntse (7129m) in Nepal, to the left of the Russian route established in 1995 by Valery Pershin, Yevgeny Vinogradsky and Salavat Khabibullin while on an expedition led by Sergey Efimov. On reaching the summit Holeček and Groh became trapped in a storm and ran out of food, having planned on spending 6 days climbing the mountain alpine style, not ten. The pair endured a gruelling descent in terrible conditions and after a final bivy were airlifted back to Kathmandu. Called Heavenly Trap and dedicated to their fellow countrymen Petr Machold and Kub Vanek who perished on this face 8 years ago, according to the two-times Piolet d’Or winner Holeček (for new routes on Gasherbrum I in 2017 and Chamlang in 2019, both with Zdeněk Hák), this is the hardest route he has ever climbed in the big mountains.

A HEAVENLY TRAP ON BARUNTSE by Márek Holeček


The objective of "Radar" Radoslav Groh and myself was the west face of Baruntse (7129m), which rises steeply up from the Hunku valley in the Khumbu region of Nepal. I had toyed with the idea of climbing a new line on this beautiful wall for several years, and always thought about it with great respect. In 2019 the idea was rekindled when I saw Baruntse in its full beauty once again. At the time however there was another summit on my list, just a little further along the same valley, namely the NW Face of Chamlang, which I went on to climb with Zdenda "Háček" Hák. That single look at the mountain was enough for me though to realise that I had to go back there, hence my return this year.

We reached base camp below Baruntse on the 13th of May. We were already well acclimatised from the previous trek, so we just waited for four consecutive days of good weather in order to start up the west face. On the 21st of May we packed climbing gear and food for six days and negotiated our way across the glacier to bivouac just below the base of the mountain.

We set off early the next day but ran into problems right from the outset, as we encountered hard ice in the lower parts which often transformed into complicated mixed sections. This is because the west face has undergone a major change in the last dry years. Indeed, a lot of snow and ice has disappeared from the slopes and, in its current condition, I simply cannot imagine anyone repeating the 1995 route led by Sergey Efimov through the pillar to the right of our line.

Due to the complex nature of the terrain we failed to make quick progress. On the contrary, the higher we climbed, the more difficult things became. As the sun and temperatures rose, deadly rockfall began to occur. After ten hours front-pointing on our crampons, we had no choice but to dig an ice platform, sit down and, clipped to the rope, survive the first bivouac. We were in the wrong place the wrong time, and about a hundred meters lower than we had originally planned.

On the 23rd of May the weather was good. We climbed to the ice slab which led us diagonally to the left, past the snow flutes and to sections of rock. Our axes hacked into hard ice all day and we followed a groove, which was bordered by a rib comprised of unconsolidated, loose snow. Gaining height was slow and cost us a lot of energy. Before sunset we discovered a hole big enough four our tent in a snow rib and we bivied there.

The next morning we were faced with the crux of the entire route, a 250m barrier of broken rock immediately above our heads. It took us a while to decide where to climb and unfortunately our ascent began to slow down just as the weather broke. With all our might we climbed through heavy snowfall to seventy meters below the ridge but were forced to camp there. Fortunately, we stumbled across a rocky outcrop, protruding steeply above the valley, which was precisely the size of our little tent.

On the 25th of May the weather was bad, but there was no other way out other than ascending the ridge, reaching the summit and descending the "normal2 route. Easier said than done though, and due to the heavy snowfall and strong winds the last mixed sections took us all day to climb. We reached the top at around 4 pm, completely frozen, and due to the thick clouds we could barely see the next step ahead of us. Shortly afterwards we pitched our tent. During the night a hurricane came and completely covered our tent with fresh snow. The strong winds continued the next morning, bringing with them vast amounts of fresh snow. We tried to descend, but after just a few meters set up our tent again and scrambled back in. Descending in these conditions was simply impossible.

For the next two days the weather was devilish, and even basic tasks such as boiling water or urinating were at the very limits of survival. On several occasions we had to dig our tent out from the snow and we just sat and waited there, and prayed. We could do nothing else. Everything we had was wet and frozen, and we were cold.

The weather finally improved a bit on the 29th of May, the wind calmed down and some visibility returned. We descended more than 1000 m along the sharp ridge that leads down towards the valley, but due to the huge amount of fresh snow and the acute avalanche risk our progress was slow. In the afternoon it became clear we would not manage to reach the glacier, and another unpleasant bivouac awaited.

The 30th of May greeted us with a beautiful morning and the promise of transforming into a great day. We immediately took advantage of this opportunity and called for a helicopter via satellite phone. The reasons for this were obvious: no one was waiting for us in Base Camp. Furthermore, the mountain slopes and the entire valley were covered in large amounts of unstable, fresh snow. After enduring tough days up on the mountain, neither of us wanted to push our luck any further and risk being swept away by an avalanche now. Fortunately our call was heard and at 7am we were freed from the icy hell by a helicopter, which took us directly across the Himalayas to Lukla in just 30 minutes.

Heavenly Trap is the name of our new route which leads steeply through the west face of Baruntse. The difficulties of the ascent are estimated at ABO+ (M6+/VI+/80°), for a total route length of 1800m (1300m elevation gain). We agreed that we wanted to dedicate our new line to our two friends Petr Machold and Kuba Vanek, who disappeared on this wall eight years ago and have not been seen since.   I can safely state that I have not yet done a harder climb in the mountains. I would like to thank my partner Radárek and God Almighty for their patience. It was thanks to them that this mountaineering gem could be created.