Gasherbrum I SW Face: the view of a rock wall from 7750 meters, 2017
Photo by Marek Holeček, Zdeněk Hák 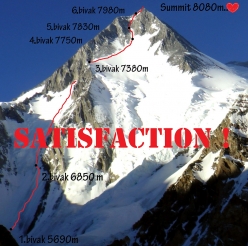 The report by Czech mountaineer Marek Holeček who with Zdeněk Hák established over 8 days a great new route up the Southwest Face of Gasherbrum I (8080 meters), Karakorum.

Demonstrating great courage and determination, on his fifth attempt 43-year-old Czech mountaineer Marek Holeček finally completed his new route up the Southwest Face of Gasherbrum I, the 8080 meter giant also referred to as Hidden Peak situated in the Baltoro region of Pakistan’s Karakorum. Holecek succeeded in crowning his dream together with 37-year-old Zdenek Hak on 30 July, after having required 6 days for the ascent and before needing another two days to descend safely off the mountain.

The new route was climbed alpine style and breaches the final headwall directly. The only other routes on the SW Face are the 2008 line climbed by Russian mountaineers Valery Babanov and Viktor Afanasiev and, of course, the one forged by Polish alpinists Jerzy Kukuczka and Voytek Kurtyka during their breathtaking tour de force in the summer of 1983 that resulted in two new routes, namely the virgin SW Face of Gasherbrum I and, 20 days earlier, the SE Ridge of Gasherbrum II. All the details of Holeček’s difficult new climb, called Satisfaction, are in his report sent exclusively to planetmountain.com. Definitely worth reading!

This project was initiated by the legendary duo of Polish Himalayan mountaineers Jerzy Kukuczka and Voytek Kurtyka more than thirty years ago, who did not succeed in climbing the central section of the Southwest Face. We followed their idea and started to chase this project back in 2009, choosing to start our climb up the lefthand ice couloir in the central section of the face.

At that time the only unanswered question was an unclear passage from the couloir to the col, through the rock bottleneck at 7400 meters that led to the snow plateau just below the headwall. Together with my habitual climbing partner Zdeněk Hrubý we solved this first crux of mixed terrain after our second bivy. The next day we continued on up to 7500 meters, to below the rock barrier. Unfortunately we were forced to make an epic escape from this place which resulted in 2000 meters of rappelling and down climbing. Hrubý suffered from perforated ulcers and in the end we safely reached basecamp as if by miracle.

Failures were collected like pearls on a necklace in 2013. During this attempt Hrubý found his death after a 1000-meter fall through the couloir. He fell down taking all of our gear with him, including the rope. So my descent became a pure lottery between either staying alive or joining Zdeněk on his final journey.

Next followed the 2015 attempt together with Tomáš Petreček, when we reached 7400 meters and descended accompanied by avalanches due to horrible weather. We reached 7700 metres together with Ondřej Mandula the following year, but fate played a tough game with us as we were pinned down at 7500 meters in a white trap with no obvious way to escape for eight days. Minimal visibility, heavy snowfall and strong winds made our descent absolutely dreadful. After the return my final toll included massive frostbite on my feet, resulting in more than 6 months of recovery.

It was a great breakthrough this year when Zdeněk Hák and I breached the tricky rock passages above 7700 meters and reached the summit after a huge endeavour. Thin layers of loose snow and rotten granite proved to be a terrible combination! In some sections the actual climbing was so thin that we had to take off our gloves and look for unstable holds to pull on in order to make slow progress upwards.

Climbing the headwall took us three whole days. We made six bivouacs in total, and four days were spent at a critical height between 7400 and 8000 meters. The last bivy found us at eight thousand meters right below the summit.

Despite the heavy snowfall and strong winds on the north-eastern side of the mountain our descent started towards the Japanese couloir and the plateau at 7100 meters. On the next day the weather turned much better and we continued down through the Japanese coulouir, with sections of snow reaching our waists. Despite the acute avalanche danger we had no choice but to continue our descent.

Our last bivouac was at the plateau at 6000 meters, from where we crossed the glacier to reach Base camp the next morning. Interestingly, so far this year we have been the only ones to reach the summit!

27.02.2014
Piolets d'Or 2014, the five nominations for the 22nd edition
From the most remote mountains in Nepal and Pakistan to the frozen lands of Alaska, via the imposing Masherbrum massif and symbollic Annapurna. Five ascents, carried out by some of the world's most talented alpinists, are in the running for Piolets d'Or 2014, the most important mountaineering award that will be celebrated from 26 - 29 March 2014 at Courmayeur and Chamonix, at the foot of Mont Blanc.