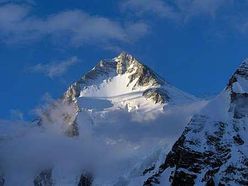 Gasherbrum I
Photo by babanov.com 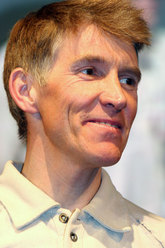 Babanov and Afanasiev climb new route on Gasherbrum I

On 01 August 2008 Valery Babanov and Viktor Afanasiev climbed a new route up the SW Face of Gasherbrum I (8068m). The ascent comes in the wake of the Russian climbers new route on Broad Peak (8047m), carried out on 17 July.

«August 1 - We just reached the summit of G-I at 3 p.m. by new route. We climbed July 29 - August 1. I'll give all details later. Valery and Viktor.» This is the text that Valery Babanov and Viktor Afanasiev sent via sms and which was subsequently published on Babanov's site www.babanov.com. A mere 16 days after their new route up the W Face of Broad Peak (8047m), the two astounding Russian mountaineers (how else could they be defined) have now made a first ascent up the SW Face of Gasherbrum I (8068m).

Two new routes in less than 16 days on two different 8000m peaks, naturally in alpine style. Underlining the value of this double taking and of these two mountaineers seems superfluous, especially since in Babanov's case one must also bear in mind his 2007 new route up Jannu with Sergey Kofanov.

Last April Babanov had attempted a difficult new route up the immense W Pillar of Dhaulagiri (8167 m). Climbing together with Nickolay Totmjanin, the due were forced to abandon their attempt due to bad weather and the poor conditions of the route. Unable to find a safe way through the upper section of the wall, Babanov and Totmjanin "made do" with the summit via the normal route.

On Gasherbrum I Babanov and Afanasiev had to overcome some difficult moments: desnivel.es reports that on 30 July Afanasiev was struck on the head by rockfall but seeing that they were unable to downclimb due to the difficulties of the route, the two continued and reached the summit on 1 August helped also be perfect stable weather.

While waiting for details to come forward it is worth noting that the two seemed inclined towards a new project of theirs of Gasherbrum II… Science fiction?