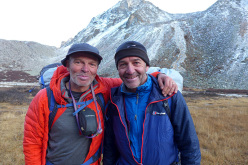 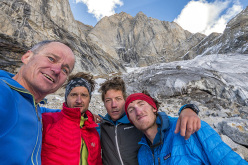 Following his ascent of Hagshu in 2014 (which received a Piolet d’Or in 2015), veteran Slovenian alpinist Marko Prezelj, whose routes in the past have already been awarded three Piolets d’Or, set his sights on the unexplored east side of the nearby Cerro Kishtwar. Mick Fowler and Steve Sustad made the first ascent of the peak by the northwest face in 1993. After acclimatizing with a first ascent of the south ridge of Chomochior (6,278m, 1,400m, D+), the four-person team of Marko Prezelj, American Hayden Kennedy (his new route on Baintha Brakk received a Piolet d'or in 2013), Frenchman Manu Pellissier, and Slovenian Urban Novak made the first ascent of Light Before Wisdom on 5-8 October 2015. The 1,200 m line is rated ED+ (more precisely: 5.11, WI6, M6, A2). The team descended by the south face and then rappelled the mountain’s east couloir. Read the planetmountain.com report

Cerro Riso Patron, 2550m (Chile)
Jerome Sullivan (France), Lise Billon (France), Diego Simari (Argentina), Antoine Moineville (France)
Cerro Riso Patron is located 50 kilometres to the southwest of Cerro Torre, in an isolated area between the Hielo Continental plateau and the Pacific fjords. During a first attempt on the south summit (which remains unclimbed) in 2014, an accident low down on the mountain interrupted their expedition early on. Accustomed to the complex logistics of climbing in the region, the international team composed of Lise Billon, Antoine Moineville (both French) and Jerome Sullivan (USA), decided to reattempt the challenge, joined this time by Argentinian climber Diego Simari (taking the place of Martin Elias). Unable to reach the foot of their initial objective, the team changed plans and shifted their sights to the main summit, which had already been climbed in 1988 by an Italian team. After an epic five-day approach, the foursome made the first ascent of the northeast pillar in three days from 22 to 24 September. This was the second ascent of the peak. Their 1,000 m route Hasta las Webas is rated ED-, with difficulties estimated at AI5+, M5, 90° and X. The first ascensionists nonetheless note that the grade takes into account the isolated location. They made the descent on the same day they summited, following the north ridge and then its flank. Read the planetmountain.com report

Gave Ding, 6571m (Nepal)
Mick Fowler (UK), Paul Ramsden (UK)
The tenacious team of Paul Ramdsen and Mick Fowler, who already received a Piolet d’Or in 2002 for their ascent of Siguniang and another in 2013 for the Prow of Shiva, made the first ascent of this isolated summit on the northwest border of Nepal. After studying different possibilities, the English climbers spent five days (from base camp to summit) putting up a very elegant new line on the north face. The route is protected from objective dangers. They reached the summit on 22 October and made the descent in two days by the west ridge and then a couloir on the north side. The overall difficulty of the 1,600 m route is estimated at ED+. Paul’s description of the line: “The first half is similar to the north face of the Eiger in terms of the complexity of the itinerary, the second half is similar to the Peuterey ridge." Read the planetmountain.com report

Talung, 7348m (Nepal)
Nikita Balabanov (Ukraine), Mikhail Fomin (Ukraine)
Having gained confidence from their first ascent of the northwest pillar of Langshisha Ri (6,427 m) in 2014, during their maiden Himalayan expedition, Ukrainian alpinists Mikhail Fomin and Nikita Balabanov decided to up the level of commitment. From 18 to 23 October (five bivouacs), the pair made the first ascent of the coveted north-northwest pillar of Talung. Their ascent was the fifth of the mountain. The first ascent of the adjacent north face was nominated for a Piolet d’Or in 2014, and came after two attempts by Marek Holecek on this same pillar. Fomin and Balabnov’s 1,700 m line, which they called Daddy Magnum Force, is rated ED+. The maximum difficulties are estimated at M6 and A3. The team considers that the route they climbed is close to the maximum of their abilities, and they were glad to be able to take turns each day with the route finding. They descended the west face, which they’d reconnoitred during the approach, with a bivouac at 6,700 m. Read the planetmountain.com report

Piolet d'Or Carrière - Wojciech Kurtyka
"... a mysterious and fascinating character, legendary for his impressive ascents. His first ascent of the West Face of Gasherbrum IV (or the 'Shining Wall') in 1985 is considered by purists to be the most remarkable alpine-style ascent of the 20th century. Born in 1947 in Skrzynka, Poland, Voytek Kurtyka was a veritable phenomenon of a generation of Polish alpinists who marked the history of alpine style climbing in the Himalayas. Along with gurus like Wanda Rutkiewicz and Jerzy Kukuczka, Kurtyka embodies the 'pioneering spirit' that was fundamental to this group of Polish alpinists who learned their craft in the Tatras. One can even go so far as to identify a 'vision' when it comes to the alpinism practiced by this generation: total commitment and immersion, pure alpine style, long winter expeditions, an attraction to beauty, and an alchemy between the climber and the summit."