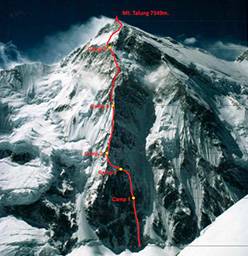 From 18 - 25 October 2015 the Ukrainian mountaineers Nikita Balabanov and Mikhail Fomin made the first ascent of the NNW spur of Talung (7349m) in the Kangchenjunga region of Nepal. The 2350m long new route has been called Daddy Magnum Force and graded M6, AI6, A3 overall route difficulty ED2.

This autumn the Ukranian mountaineers Nikita Balabanov and Mikhail Fomin set their sights on what they have described as "one of the most esthetic and logical unclimbed lines" in the Himalaya, the long and difficult NNW Spur of Talung in Nepal’s Himalaya.

Inspired by the 2012 British Talung Expedition by Gavin Pike, James Clapham and Dave Searle - and by successive attempts by Czech alpinists Marek Holecek and Zdenek Hruby and by the Italians Daniele Bernasconi, Mario Panzeri and Giampaolo Corona - the Ukrainians established BC at the end of September. Acclimatization was successfully carried out during the next fortnight, on Boktoh peak and, importantly, up to 7100m on Talung’s normal route which they planned to use during their descent.

A short period of bad weather coincided with 3 days of rest, after which they headed off to ABC below the NNW Spur. Knowing they would have to deal with "Chamonix mixed climbing but with heavy packs higher than 6000m" they took food for 7 days and gas for 9. The first pitch above the Bergschrund at 5600m proved to be one of the cruxes of the route, a thin ice pillar followed by some hard vertical mixed terrain (M6) with very run-out protection. Over the next three days difficulties eased off only slightly.

On day 3 they reached the spur proper and were faced with a second crux: tenuous A3 aid followed by difficult mixed and then loose rock, which all led to somewhat easier ground. Despite hard mixed climbing on thin ice they gained height rapidly, breaching the obvious second rock band on day 5. Motivated by this success, on day 6 they simul-climbed along the ridge to reach summit at 14:00 on 23 October.

The top was covered in fog but 10 minutes later the strong winds blew away the clouds, offering stunning views onto the East faces of Jannu and South faces of Kangchenjunga. After half an hour on the summit they started down the western slope, bivying at 6700m and then descending safely to BC the next day, having been on the mountain for 7 days in total and just in time to rush to Kathmandu and catch their flight home.

Balabanov and Fomin’s remarkable success on this important prize comes in the wake of their first ascent of on Langshisa Ri (6427m) NW Spur in 2014. Commenting after their ascent, they stated "It total for both of us that route showed at the same time how much things we still have to learn in Himalaya, but also it showed how much we already can do. Each of us have lost 10-15 kg of weight after this ascent but the experience and huge motivational charge we received at the end is really worth it."

For the excellent detailed trip report check out www.mountain.ru