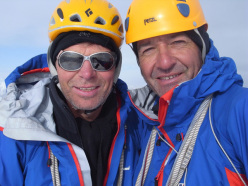 British mountaineers Mick Fowler and Paul Ramsden have made the first ascent of Gave Ding (6,400m) in Nepal's Himalaya.

"My happiness bubble is close to bursting." These are the words Mick Fowler transmitted in a brief message confirming that on Thursday 22 October he and regular climbing partner Paul Ramsden had reached the summit of Gave Ding, a hitherto unclimbed 6,400m peak in far west Nepal.

Gave Ding is located in one of the remotest regions of Nepal according to Fowler, who had noticed the mountain during an earlier expedition to the area. After receiving the necessary permits he left the UK together with Ramsden, Steve Burns and Ian Cartwright at the end of September.

The four established Base Camp and then Fowler and Ramsden climbed a route up the mountain’s North Face, summiting on 22 October before spending two days descending via the unknown west ridge and North Flank. The ascent took six days in total.

Prior to leaving Fowler had stated "aside from Google Earth images and a distant shot taken from the west, we have little idea of what we might find there. What we do know is that, when Google Earth is set at the right time of day, the shadow of one of the north faces in this valley is longer than all the others in the area. We take that as a good sign. Surely it can only mean that it is the steepest and biggest around?"

Gave Ding is the latest in long line of successes for this tried and tested British duo, whose outstanding contribution to mountaineering has netted them two Piolet d’Or, the first in 2002 for their ascent of the Central Couloir of Mt Siguniang and the second in 2013 for their ascent of Mt. Shiva in India.