Chamlang NW Face: Zdeněk Hák on the summit ridge. After 4 bivies he reached the 7321m high summit with Márek Holeček on 21 May 2019, and the duo required a further two bivies to descend safely off the mountain
Photo by archive Márek Holeček 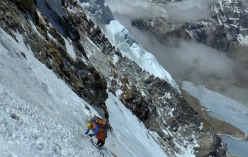 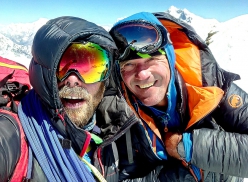 Zdeněk Hák and Márek Holeček on the summit of Chamlang after having climbed the NW Face. 'We have agreed that this is the hardest climb we have done together in the mountains, ABO in other words.'
Photo by archive Márek Holeček

Czech mountaineer Márek Holeček reports about his alpine style ascent, carried out with climbing partner Zdeněk Hák of the virgin NW Face of Chamlang (7321 m) in the Nepalese Himalaya. The new climb has been called UFO Line and is described as 'the hardest climb we have done together in the mountains.'

On 23 May 2019 Zdeněk Hák and I completed the first ascent of the north-west face of Chamlang (7321 m), a face that in the past had been attempted unsuccessfully by many other expeditions. The summit of Chamlang overlooks the Hongu valley, two thousand meters above the valley floor, and it rises steeply from the glacial moraine and its lake, making it feel more like a solitary giant rather than an integral part of the central Himalayan ridge with numerous other summits. For nearly twenty years I kept this goal in mind, however it was finally realised only this year.

On arrival there were several obvious problems we had to cope with. The vertical face offered no obvious lines of weakness and we were certain that we would have to deal with some very hard mixed sections as well as pure rock and ice. The other objective danger was the lack of natural shelter spots on the face that could be used during adverse weather conditions. Similarly, from below good bivi spots also seemed very rare. This made a clear message – we have to climb fast, with the help of God Almighty. The last unanswered question we had to think about was the descent, how to get down from the summit. No prospective descent route offered an easy retreat.

On 16 May we crossed the glacier and spent a night right at the foot of the climb. The next dawn found us tackling the first metres up the route. We packed a small bivi tent, one 80m 7mm rope, 6 ice screws, 5 pitons and 5 friends. We also added food supply for five days plus 3 gas cartridges along with the necessary dose of good fortune into our backpacks.

The following days turned out to be the true picture of our imagination. Loose rock on the lower part was followed by hard mixed climbing and concrete-like ice. Bivouacs gradually got worse the higher we got, providing space for about half a body, while we needed to seat our two butts there.

On 20 May we reached the top of the face and traversed the entire summit ridge, including the main summit on 21 May. The last two and a half days of descent resulted in a hard fight to return amongst the living. The dangerous ridge and a steep icefall cost us a lot of energy and nerves. We ran out of food and both our bodies and minds felt really worn out and fatigued.

Finally on 23 May we returned to below the face once again, having completed what we believe is a great climbing feat. A childhood dream was fulfilled.

We returned to base camp with no one waiting for us, no celebrating crowds whatsoever, just one pack of dehydrated food in a single tent. The next day we loaded our base camp belongings onto our sore backs and crossed the Mera La Pass towards civilization. This was the end.

We named the climb UFO Line, to commemorate the ascent of Reinhold Messner and Doug Scott who supposedly saw UFO during their ascent of Chamlang… Who knows what it was they really saw. Well, I know I saw an alien climbing alongside me all the time, namely "Hook", ie my climbing partner Zdeněk Hák ;-)

We have agreed that this is the hardest climb we have done together in the mountains, ABO in other words. It really is our most difficult ascent ever, and we believe it is of international importance.