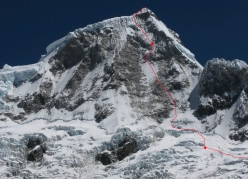 Not even three months after the impressive first ascent of the northwest face of Chamlang in Nepal, Czech mountaineer Márek Holeček has struck again with another impressive new route up Huandoy North in Peru. Climbing with Radoslav Groh, Holeček climbed the 6360m with two bivouacs in 55 hours, past difficulties up to M6, WI6 on the 1200 meters route

Details of the first ascent will follow in due course - currently the duo are aiming to establish something new on Huascaran - but the new route Huandoy North called Boys 1970, in remembrance of the approximately 70,000 victims of the 1970 Ancash earthquake which included 14 climbers from the Czech Republic.

Expedition Huandoy Peru 2019 All saints at attention… Two days of hard work and fear, in exchange for one minute of joy.  After 55 hours we return to refugio Peru. It's done! There is the great new Czech route. However, I will write the entire report from the Peruvian rendevous until I finally returnv back after 20th of August  from  hills. Cause I still have another sweet top in front of me, in Cordillera Blanca. But one thing is certain: from 9th of Audust  there is the new line, 1200 meters long  on Huandoy North 6360m. We named the route “BOYS 1970” with my climbing partner Radoslav Groh. The difficulty is M6, WI6. Maybe it should have been labeled "Hell", but it is not reverent to the "lady" who gave us a strong experience ... So in the end we named the route to the memory of 14 climbers who came from the Czech Republic . Because just here under Huascaran,  to a few unfortunate seconds, dreams had dissolved fifty years ago, both theirs and another 70,000 people farther down the valley. Unfortunately, they did not have the o nly, inscrutable and unsubscribable…… happiness. . . #marekholecek#maara #pronasledujsvesny #followyourdreams #huandoy#peru#expedition#firstascent#suunto #goalzero @mammut_swiss1862 @hudysport @bigshockcz @mercedesbenzvans_cz @conseq.cz @devoldczsk @jetboilczsk