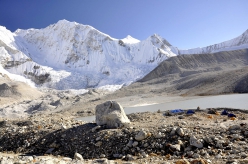 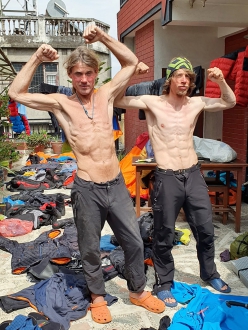 Czech climbers Márek Holeček and Radoslav Groh are safe and sound after having established a new climb on the NW Face of Baruntse (7129m) in Nepal. After climbing the route alpine style the two Czech mountaineers endured an epic, 80-hour descent.

Márek Holeček and Radoslav Groh from the Czech Republic are safely in Kathmandu after surviving what can only be described as an epic ordeal on the NW Face of Baruntse, the formidable 7129m peak in Nepal’s Himalaya.

Last week Holeček, a two-times Piolet d’Or recipient, and Groh forged a new route up the mountain’s formidable NW Face in alpine style, i.e. no fixed ropes, no porters and no high altitude camps, encountering extremely difficult conditions and also bad weather on their way up.

After five bivouacs and challenging, technical climbing, on Monday 24 May the pair were poised 50 meters below the summit when 46-year-old Holeček explained via satellite phone “We are tired like kittens, frozen, hungry and thirsty. God help us to climb up tomorrow and also to descend.” At four on Tuesday they summited but were soon forced to make their 6th bivouac at an altitude of about 7000 meters; Holeck stated “We didn’t even take pictures, no expressions of joy, and we immediately continued as soon as the hellish weather allowed us to descend.”

Terrible conditions continued however and the Czechs found themselves pinned down by a raging storm and high snowfall. On Wednesday Holeček communicated eerily “White darkness. We are imprisoned here by the weather. Another bivouac on the ridge of Baruntse at 6900 m. It is snowing, it is blowing and there is white darkness all around. We would need 3 hours of good visibility and we would be down safely. We will try to descend at night.” The weather did not improve and, with a window predicted for Saturday only, things began to look worrying. Furthermore, they were low on food, energy and batteries for their satellite phone.

On Thursday Holeček reported they were still trapped at 7000m and were “waiting for a miracle that will hopefully arrive on Saturday” while on Friday he reported in much the same manner: “We survived another hellish night in a hurricane and under heavy snowfall. We had to constantly dig the tent out of the snow. All prayers now go to Saturday.”

The climbing world waiting with bated breath and then, on Saturday morning, Holeček broke the news everyone had been waiting for explaining jubilantly "in the morning there is sun and no wind! Let's go down, let's go down, let's go down.” The duo somehow managed to descend 1100m past “terrible snow” and after another night out in the cold, early on Sunday morning they were airlifted to hospital in Kathmandu for routine mediacl checks. Their 10-day ordeal on Baruntse had come to an end, in the best of all possible ways: “exhausted but alive”.