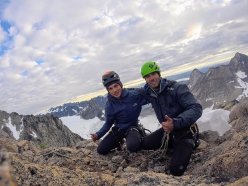 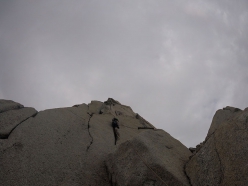 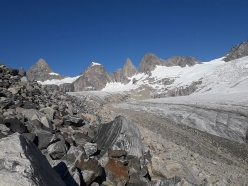 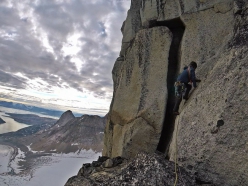 On Asta Nunaat in eastern Greenland Andrea Ghitti and Fabio Olivari have made the first ascent of 'Gioielli Viventi', a new rock climb (320m, VI+/A1) established on 9 August 2018. This is likely to be only the second ascent of this mountain, after the first carried out in 2006 by Andi Fichtner, Christoph Hainz and Roger Schaeli. Olivari reports.

Greenland is the largest island and the least densely populated country in the world. It has a surface area 7 times that of Italy but only 55 thousand inhabitants, of which 90% live on the west coast where the capital Nuuk is located. We chose this island because we were looking for a place full of unexplored mountains, many still nameless, just waiting for a first ascent. In short, we were looking for somewhere to do some pure and exploratory mountaineering, a bit like what the alpinists experienced in our Alps in the 18th and 19th century.

We chose eastern Greenland firstly because it is much wilder and more isolated than western Greenland, and secondly because Robert Peroni has lived in Tasiilaq for over 25 years. Peroni is a great alpinist and extreme explorer and he helped us with the boat trips as well as providing us with valuable advice about what mountains to climb.

Our adventure began on 2 August 2018 with our departure from Milan, after some problems with our flights we arrived in Greenland and immediately realised how isolated this place is. We landed in a small airport with the dirt track, and quickly boarded a helicopter, destination Tasiilaq, which with its 2000 inhabitants is the "metropolis" of East Greenland. We immediately met Robert and after taking a satellite phone and a rifle to defend us from the bears, we hopped onto a boat that took us the foot of the Niaaligaq glacier where, according to Robert, there is the most beautiful and difficult mountain in the area.

Once on the foot of the glacier (located about 300 meters above sea level) we established our base camp where we stashed some of our superfluous gear. We had two 40kg backpacks and had to lighten our load, seeing that we’d have to walk a fair bit to get to there base of our mountain. On 8 August we set off from base camp and walked towards the glacier, past unstable moraine. Once on the glacier proper we finally caught sight of our peak in all its splendor, a sharp tooth of perfect rock. To get to its base we had to wade through 40 cm of poor snow, past gaping voids and huge crevasses, and even though we’d lightened our packs a bit, they still weighed us down considerably. We reached the foot of the mountain completely exhausted and pitched our tent on a granite block on the snowfield to the right of the glacier. The base was neither smooth nor flat, and as if this didn’t suffice the surface was only slightly larger than our tent; a 10m drop directly onto the glacier to one side, and a vertical rock face on the other. We weren’t comfortable, but seeing how tired we were, we slept soundly.

The following day we woke up to breathtaking view, behind us a huge wall, ahead of us a limitless stretch of fjords full of icebergs and, far in the distance, the endless ice cap. We quickly made our way to the base of the wall, carved clean by a thick network of cracks. We scrambled up a 50/60° snow gully to reach the start. Without encountering too much trouble we established the first 4 pitches, the difficulties were not severe (maximum V+), the rock good but not the best, and we managed to protect ourselves fairly well thanks to the numerous cracks. At the end of the fourth pitch we reached a 10-meter ledge, immediately behind which was a vertical wall split by an obvious slightly overhanging corner. We climbed this free until about half-height, to where a granite boulder formed a roof and blocked our path. We aided past this, placing a 0.75 bd in the crack above, and aided some more until the corner eased off, enabling us to continue free climbing all the way to the belay. We continued by forging some easier pitches that followed a very logical line between corners, chimneys and cracks past various VI/VI+ sections. These were not to be underestimated though given the environment and isolation.

After several hours of climbing we reached the summit, the air was cold, we admired the endless peaks around us, ate and drank something. We were very happy. This was the first time we climbed a new route and to do so in this traditional style and in a place like this provided us with infinite joy. Having said that, we remained vigilant and concentrated, given that we still had to descend. The abseils would prove to be a real odyssey.

We tried to make short rappels but pulling the ropes proved complicated due to the morphology of the mountain and truly exceptional friction. During the first abseil the rope wrapped around a spike, after having tried everything possible we had to reclimb the ropes and set up an intermediate belay. The second abseil went fairly smoothly, unlike the third: while pulling the ropes a knot got stuck in a crack, we tried to whip it out but once again to no avail. We had to climb up again and as if that wasn't enough, we discovered that the knot was completely stuck, even when we pulled the rope upwards (this has never happened to us during all our years mountain climbing in the Alps) so we eventually were forced to cut a section of the rope. From then on, the abseils gradually improved, although our arms ached from pulling the ropes down ther high friction granite. At 1 am we arrived at our tent, after having spent the last hour in the rain, in the dark and with frozen hands as the gloves could do little to protect us from the rain. Without even having dinner we crawled into our sleeping bags, we were exhausted.

The probable new route was climbed on the wide ridge along the south face. After much research we have come to the conclusion that ours is probably only the second ascent of Asta Nunaat, after the first carried out in 2006 by Andi Fichtner, Christoph Hainz and Roger Schaeli via Turtle (18 pitches 7b + A2) up the west face. We publish this report in order to document what we did and also to see if others have climbed this mountain. We did not come across any traces of other humans, hence we believe the route is new. We left 7 pegs in-situ and about 10 slings during the descent.

We called the route  Gioielli Viventi, Living Gems, in the words of Robert Peroni who used this definition to describe Greenland’s children. The young here do not cry and never complain, they constantly have a broad smile even if they have little or nothing. Many of them are orphans, others have difficult situations at home (Greenland’s population has been brought to its knees by the laws imposed on them, quotas for seal and whale hunting followed by the introduction of financial support to families so that they can maintain themselves without having to hunt for a living has destroyed the spirit of the Inuit hunter; men feel replaced by this effortless economic support that allows for food and various goods, consequently they have started to feel useless, often resulting in depression and alcoholism). Nevertheless every day the children find the strength to smile.

31.08.2018
Robert Jasper completes Stonecircle on Greenland solo trip
German rock climber Robert Jasper has returned from his solo expedition to Greenland after having made the first ascent of Stonecircle (7c, 450m) up Molar Spire above the Angmassalik-Tasilaq Fjord.

14.10.2016
Aurora Artika, discovering the climbing in Greenland's Mythic Circle
Paolo Marazzi talks about his 'sailing and climbing' experience in Greenland’s Mythic Circle. The result: two new 800m climbs and above all though ‘an absolutely unique adventure in the North Sea.’