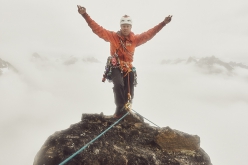 Robert Jasper on the summit of Molar Spire, Fox Jaw Cirque, Greenland after the first ascent of Stonecircle during his solo climbing expedition.
Photo by Robert Jasper

Robert Jasper photographed from his drone while on the summit of Molar Spire, Fox Jaw Cirque, Greenland after the first ascent of Stonecircle
Photo by Robert Jasper 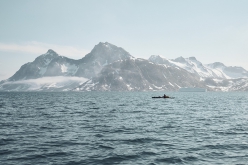 German rock climber Robert Jasper has returned from his solo expedition to Greenland after having made the first ascent of Stonecircle (7c, 450m) up Molar Spire above the Angmassalik-Tasilaq Fjord.

As previously reported, in mid-July Robert Jasper embarked on a solo climbing trip in East Greenland. The German left civilisation from Kungmit, the last Inuit settlement, and paddled to remote fjords in his sea kayak transporting 90kg of gear and provisions completely on his own. After 12 days of hard paddling and heavy hauling he established base camp at the foot of the Fox Jaw Cirque and soon set his sights on the second granite tooth called Molar Spire.

He reached the wall via a snow colouir, then climbed seven pitches in two days. He kept returning to base camp since the weather was unstable, and on the third day he pushed for the summit despite poor weather. It started to rain shortly before the summit but then the weather improved. "The clouds cleared and you could see the surrounding mountains and fjords. I was all alone, no person in sight as far as the eye could see. It was like in heaven. Indescribably beautiful!"

Jasper abseiled down the route and reached his tent 18 hours after having set off, then made his way back to civilisation. After 30 days in the wild, having covered 100km on foot, climbed 1000m of steep rock and paddled over 100km by sea kayak, Jasper returned to Kungmit, closing his personal "stone circle”.

Summing up his adventure, Jasper stated "The most impressive things in life are often rocky and hard. That's how they stay in the back of your mind. This expedition pushed me to my limits. It was a huge adventure in a magnificent natural setting! An absolute highlight. I made many valuable experiences during the trip. An absolute jewel in my life!"

08.05.2012
Shark's Fin in Chile by Jasper, Heller and Gantzhorn
In April 2012 Robert Jasper, Jörn Heller and Ralf Gantzhorn carried out the first ascent of the Shark's Fin Ridge. The route climbs the west face of Monte Giordano (1517m, Chile), a mountain which in all likelihood has never been climbed previously.
17.11.2005
Glowacz and Jasper summit Murallon!
Stefan Glowacz and Robert Jasper have completed their "Vom Winde verweht" up the North Pillar of Murallón, Patagonia.