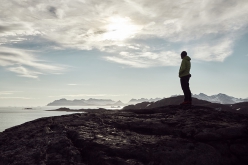 Robert Jasper in Greenland in July 2018, ready to set off on his solo climbing expedition
Photo by Frank Kretschmann / www.funst.de 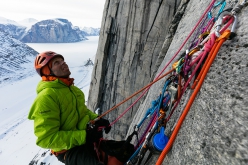 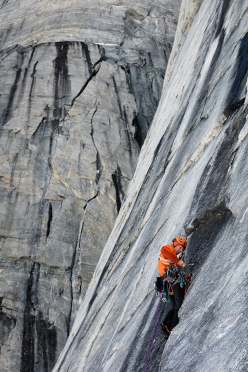 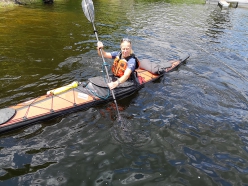 Interview with German alpinist Robert Jasper who is currently on a by fair means solo climbing trip to Greenland.

Robert what’s the general plan?
A solo expedition completely by myself from the last point of civilisation. This style is also referred to as “by fair means” and the one I like most. After a few days at sea on my kayak I hope to reach the end of a fjord, but I may need to hike for a day or two to reach the rock face I’ll eventually try and climb. I don’t know yet what I’ll climb, it just depends on what I see while exploring. Of course I’d like to climb a new route; a first ascent on one of this beautiful mountains which definitely requires various days of climbing would be a highlight for me! Best of all: a tough new tough route climbed free, using my rope solo system for safety!

How alone will you be?
From the last Inuit village, i.e. the last point of civilisation, I will be completely on my own for about 30 days. My cameraman and friend Frank Kretschmann will be with me for the first couple of days to shoot the final preparation and my start, but then he will travel back home!

What are you looking forward to?
For me this solo expedition is a very big personal challenge, I’ve got to combine sea kayaking, big wall climbing and free climbing in such a remote area, while being completely independent in this wild nature for such a long time. I think if I manage all this it’ll be a huge step forward for me. Having the strength to manage all these tasks as a team isn’t easy, and facing them by yourself is surely the biggest challenge of all.

What are you not looking forward to?
Meeting a polar bear!

When we last spoke, you’d just done Flying Circus solo. How important was this in your “training”?
Quite important, because I was very ill last year! I regarded it as a test, to see if I was fit again. And of course it had been a big dream of mine, to do the first solo ascent of this beautiful and famous mixed route!

You’ve been on many by fair means expeditions before. So how do you rate this one?
As I said, this one is surely the next step for me because I’m going solo, by myself! Of course it’s usually much more fun to go on expedition with friends, but now I’ve come to the stage where I’m interested in the challenge of going alone. Risk management becomes even more important. This needs a lot of experience, good training, the best equipment and a cool mind and a lot of self control. But if it all works out, then you’ve mastered the but if you Königsdisziplin!

Königsdisziplin… after all these years, what is important for you in your climbing and alpinism?
To continue moving forward, slowly, step by step and never stand still! To manage my personal challenges and the risks in life. And life out my dreams.

08.05.2012
Shark's Fin in Chile by Jasper, Heller and Gantzhorn
In April 2012 Robert Jasper, Jörn Heller and Ralf Gantzhorn carried out the first ascent of the Shark's Fin Ridge. The route climbs the west face of Monte Giordano (1517m, Chile), a mountain which in all likelihood has never been climbed previously.
17.11.2005
Glowacz and Jasper summit Murallon!
Stefan Glowacz and Robert Jasper have completed their "Vom Winde verweht" up the North Pillar of Murallón, Patagonia.