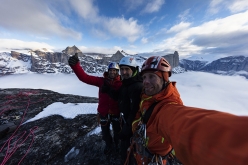 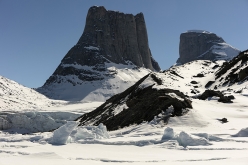 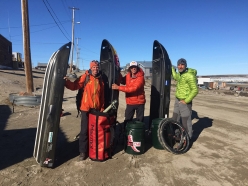 German alpinists Robert Jasper and Stefan Glowacz and photographer Klaus Fengler have just returned from an expedition to Baffin Island where, on the West Face of The Turret, they managed to repeat and add new free variations to Nuvualik, the climb established in June 1995 by Warren Hollinger, Jerry Gore and Mark Synnott. The German's ascent was carried out in their habitual hallmark by-fair means style.

The trio set off on 31 May 2016 from Clyde River and, dragging their sledges full of provisions for the next month, spent the next nine days making the “strenuous and beautiful journey” across the pack-ice past Cape Christian, Eglinton Fjord, Revoir Valley, Swiss Bay to reach Sam Ford Fjord, where they established their base camp.

The trio had their sights on Mt. Turret, a spectacular peak that juts 800m above the fjord, first climbed in 1987 by a Swiss team comprised of Xaver Bongard, Christian Dalphin, Peter Gobet and Bernard Wietlisbach. The idea was to climb the logical line up the West Face which they believed was untouched, but soon they realized their chosen route had already been climbed. Only on their return did they find out that they had largely followed was Nuvualik (VI 5.10+ A3), established in June 1995 by Warren Hollinger, Jerry Gore and Mark Synnott.

"Our initial surprise soon gave way to delight though" Jasper told planetmountain.com. "We’d put so much effort into traveling so far, on our own, as a tiny three-man expedition, and we needed something logical, something that we could climb relatively quickly and something that was aesthetically appealing, so we decided we climb that line nevertheless."

With Jasper and Glowacz swinging leads and Fengler taking photographs, the trio made rapid progress. Following the line of least resistance involved adding new variations to the original route and things ran smoothly until circa 1/2 height, when Glowacz was struck by rockfall. "His hands were hit and it looked bad, all of a sudden things got very complicated indeed" explains Jasper, "luckily we realized that if I continued doing all the leading, perhaps we’d make it to the summit nevertheless." Jasper proceeded and although progress was hampered further by extremely weather difficult conditions, the trio pushed on successfully and summited at 2:30 on 14/06/2016.

"We’d been on the go for 20 hours, it cost a lot of energy, and when we summited we were as delighted as we were relieved." The Germans had breached difficulties up to 7b+ and M6 and climbed one section of A1 aid on the upper reaches of the mountain where the rock was plastered with a layer or ice. They quickly abseiled down the route and returned to base camp.

As with all by fair means ascents climbing a route is only half the journey, and what awaited them now was the long return home. Given the time of year - late spring - the sea ice had begun to melt and the trio were forced to wade through 10cm of freezing water to leave Sam Ford Fjord, after which they crossed Swiss Bay, Revoir Valley, Eglinton Fjord, Ayr Pass, Ayr Lake and Sledge Pointers Mountains on foot. In total, the 170km return took 13 days and the trio finally trundled safely in to Clyde River on 28 June.

In 2008 Jasper and Glowacz made the first ascent of Take the long way home (700m, 21 pitches, A4 10-) on a remote granite wall on Baffin Island, Canada. Compared to that expedition - and many others that have taken place in this remote corner of the world - the recent trip marks a significant step forward in their by-fair means approach. "This year" explains Jasper, "we relied on ourselves only, on nothing else. No outward support from the local Inuit hunters, no snowmobiles, nothing…we were a tiny, three-man team, with only two of us doing the climbing,  and this made for a very, very intense adventure. The actual climbing was nothing more than the icing on a very big cake…"