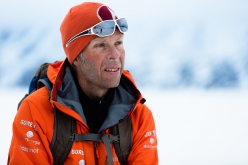 High up on the Breitwangfluh in Switzerland’s Bernese Oberland German alpinist Robert Jasper has made a rope solo, free ascent of his world famous mixed climb Flying Circus.

Early on 7 February 1998 Robert Jasper quickly made his way up to the Breitwangfluh, the hugely impressive bastion above Kandersteg in Switzerland's Bernese Oberland. Ther German alpinist was his wife Daniela and the two made the first ascent The Flying Circus. The duo fully realised at the time that the four-pitch outing was difficult - it checked in as the world’s first M10 - but what they obviously didn’t know was that Flying Circus would rapidly consolidate into one of the world's most famous mixed routes, a reference point by which other climbs past and present have been measured. On 24 February 2018 Jasper returned to his masterpiece and made the first rope solo. Alone, with a rope, and free, without ever falling. Here's how his recent rope solo went, 20 years after the first ascent.

Robert, tell us about this rope-solo

Flying Circus is probably one of my best-ever mixed first ascents and making a rope solo is something I’ve been thinking about for a number of years. This season conditions are great. And as it happens, its the same year as the route’s 20th anniversary! For me a huge dream has just come true.

Why rope solo?
Well there are of course lots of different styles of climbing, but what I’ve always been interested in is free climbing. My aim was to climb it completely on my own, and free.

Which means
Well it’s quite complicated but it basically means you climb a route three times. You climb a pitch, then descend to clean the gear, then jumar back up. Basically you do everything that two people would do, but you’re completely on your own and can rely on yourself only. And on a route like Flying Circus this can become extremely complicated. Although it’s not long, it has traverses below  hanging daggers, so technically the rope work is complicated and you really have to consider all the dangers involved.

Did you ever consider climbing it free solo, i.e. without a rope?
No, for me that's like playing Russian Roulette. While I respect people who do free solos, this style of climbing is not for me any more! My life is more important than anything else, it’s the most important thing we’ve got. You know, you’ve always got to balance things up, consider the risks and ask yourself if it is really worth it. And by climbing rope solo, i.e. on my own but with a rope, I’ve got an acceptable level of what I call calculated safety.

Talking about calculated safety. You established the route 20 years ago. Presumably you know it like the back of your hand?
Well no, not really. I haven’t actually climbed it that much. After the first ascent I repeated it back in 2013, one day while establishing Ritter der Kokosnuß I ventured back onto Flying Circus. And now I climbed it a third time.

How did it go?
The first pitch of Flying Circus wasn’t in condition so I started up pitch 1of Ritter der Kokosnuß, which is steeper and somewhat harder than Flying Circus. These share the same belay, from there I continued up Flying Circus. The hard bit about the route isn’t so much the physical climbing for me now - M10 isn’t too difficult for a professional mixed climber nowadays - but dealing with the psychological aspect. The belays are bolted nowadays, but the pitches are protected with pegs and trad gear. On the traverse pitch I had to deal with some fairly long run-outs and I have to admit I was really happy I climbed it all first go!

Were you completely alone?
There happened to be some other climbers on the Breitwangfluh, but they were a long way away. I’d decided to make my way up there alone, if that’s the question. It would have been nice to have a photographer along to have some great photographs, for sure, but I wanted to be alone.

You’ve been doing other rope-solos recently, how come?
I’m training for a solo big wall trip to Greenland. I plan to reach the mountain by sea kayak and will be out in the wilderness  for 30 days, completely on my own. This in my mind is the Königsdisziplin, the supreme interpretation of adventure climbing.