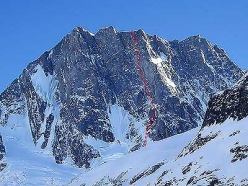 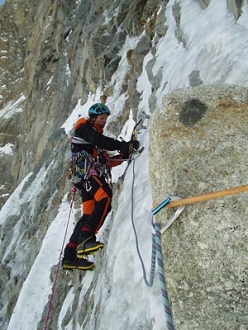 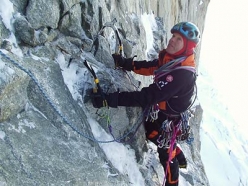 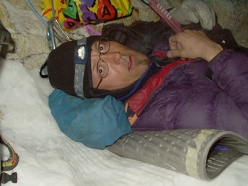 Robert Jasper and Markus Stofer have repeated the great mixed climb 'No Siesta' up the North Face of the Grandes Jorasses in the Mont Blanc massif from 17 - 19 March 2003 .

No Siesta, the great route up the North Face of the Grandes Jorasses, was repeated in mid-May by Robert Jasper (Germany) and Markus Stofer (Switzerland). First climbed by Jan Porvaznik and Stan Glejdura in July 1986, No Siesta has long been considered one of the most demanding mixed routes in the Alps.

To date it has seen perhaps only five repeats, and Jasper and Stofer’s ascent is without a doubt noteworthy: in three days they climbed the entire route on-sight, bringing the grade to VI+; M8; E5 and makig the first all-free ascent.

Jasper affirms “the line of ascent is ingenious and psychologically demanding. The route now offers excellent modern mixed climbing, with difficulties up to M8, above all on thin ice and mixed terrain. The individual pitches are beautiful and the route as a whole is long and serious! That Porvaznik and Glejdura managed to climb it with the techniques and gear used 17 years ago is truly outstanding.”

Long and serious – this is why the two chose to climb the route using leashes. As Jasper explained to us: “on long alpine routes I believe that it’s simply too dangerous to climb without leashes. If for some reason you drop your ice axe, the situation suddenly becomes very serious indeed. Last year I discussed this at length with Will Gadd and other Canadian climbers and we came to the conclusion that leashes are essential on long mountain routes, because of the added security they offer. On modern drytooling routes they’re obviously taboo”

The ascent by Robert Jasper

Day 1- 17 March
"We ventured towards the North Face on 17 March, waking up at 2.00am to cross the glacier and start up the initial 55° slope. After about 350m we hit upon the first rocks and tied in to start the climb proper – the difficulties began immediately. Using 70m ropes we climbed sections up to M7+, following thin slivers of ice and granite. With three hours of daylight left we reached the first bivy used by the Czechs, but chose to continue on up, to then reach an extremely uncomfortable ledge just large enough for one person – this is where we spent the night."

Day 2- 18 March
"Snow! It may seem impossible, but at first light it was snowing. But the Swiss weather forecast didn’t get it wrong and at 10.00 the clouds lifted. We spent almost the entire day climbing the hard central section, with the crux, originally graded 7- A1/2 climbed onsight. We then found the second bivouac used by the Czechs and decided to have a slightly more comfortable night, at least compared to the first."

Day 3- 19 March
"The third day arrived quickly and we climbed sections of M5/M6 at almost 4000m. At 15.00, after a final corner, we reached the summit crest, with its fantastic view onto Gran Paradiso and the Italian Valle d’Aosta."


Further info about the ascent

Walk-in: We chose to walk in from the Aig. du Midi. We skied to the Leschaux refuge (about 2hrs, take stove and gas for the refuge!) From the refuge we followed the line of ascent for the Croz Pillar (about 2hrs)

Descent: Descend south; two abseils down the first slope, then continue down the normal route to Rif. Boccalate (about3 hrs) and then on to La Palud (about 3 hrs)

Notes:
- We used 70m ropes. This helped us setting up the belays on the thin ice.
- the pitches were often very long (18 pitches for 1100m) and the belays we found were on the whole fairly good.
- Apart from a few pitches it is not possible to haul up the haulbag
- The bivouacs are not good and uncomfortable.
- We left our skis, climbing skins, poles and a rucksack at the base of the route. We then collected them afterwards using a second pair of skis.
- Gas: we used about 170 ml/day; the temperatures were roughly around 10/ 15 °C!