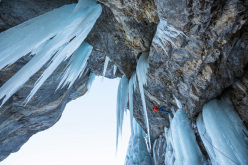 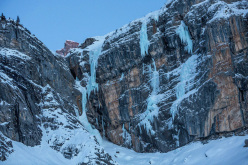 The Breitwangflue at Kandersteg in Switzerland. On the left: the cave with Flying Cirus and Ritter der Kokosnuß; in the centre: Mach 3 (IV M9, 150m, Robert Jasper, Markus Stofer 2003): on the right: Tränen der Eisprinzessin.
Photo by visualimpact.ch | Hans Hornberger 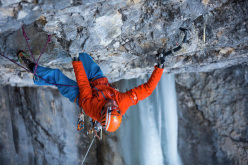 On 13/02/2013 Robert Jasper made the first free ascent of the ice and mixed climb Ritter der Kokosnuß (M12, WI5, 165m) up the Breitwangflue at Kandersteg in Switzerland.

M12, WI5, 165m up the impressive Breitwangflue above the Swiss village of Kandersteg, established after numerous attempts spread out over the years, always ground-up and without bolts, protected with ice screws, pegs and nuts and friends. These are the main characteristics of the new route freed on 13 February 2013 by German alpinist Robert Jasper together with Rainer Treppte next to the famous Flying Circus. A route called Ritter der Kokosnuß and which, apart from its technical difficulties, seems to offer a great psychological challenge.

The Breitwangflue close to Kandersteg (Switzerland) is well known for its spectacular and bold ice and mixed climbs wedged in an amazing alpine scenery. Back in 1998 my wife Daniela and I realised an old dream of ours by carrying out the first ascent of Flying Circus, a route which, over time, became recognised as a milestone of mixed climbing. At the time I was inspired by the British comedy group Monty Python and hence the new name Ritter der Kokosnuß – the German version of Monty Python and the Holy Grail.

Years ago I’d noticed a direct line next to Flying Circus, straight through the massive cave up past huge ice daggers. I established the first pitch 10 years ago, an M9 marked by fragile daggers and loose rock but I stopped below the enormous horizontal roof, I was burnt out mentally. My personal goal - to climb in trad style – sent a shiver down my spine.

After a good training period at the start of winter - during which I managed to send a series of demanding dry tooling climbs at Eptingen all on the same day - I finally felt strong for my old project. But my first attempt failed, for mental reasons. The brittle rock surprised me once again and together with Wolfram we exited via Flying Circus. Tthe bird's eye view from the abseil however was enough to set the spark once again.

After a rest day I summed up the courage to give it another go. Armed with nuts, Friends and pegs I worked my way carefully upwards, ground up, past downward-pointing pegs which didn’t offer much reassurance. Mac established the third, wildly overhanging pitch that led to the ice drip. The cornerstone had been laid.

After another restday I figured I stood a good chance of freeing the line, however two falls off the crux (about M12) quickly brought me back to reality. I couldn’t move properly, the fear of that loose rock and the dubious protection paralised me. I reached the belay with forearms as big as ballons and had just enough energy to check out the third pitch, at M9 not exactly a walkover.

Thanks to the immense support of my climbing friends I returned two days later, this time with my Mountain Guide colleague Rainer Treppte. The first pitch now felt like a warm-up, incredible how quickly things can change! And this time, fuelled by plenty of adrenaline, I sent the next pitch without making any mistakes whatsoever, I executed each move perfectly. I felt like I was in a trance, everything around me disappeared, it was a perfect moment! This was followed by the M9, then the WI5; we’d done it! As we reached the top it began to get dark. A "knightly" handshake at the top crowned our successful ascent.

One often argues about the future of alpinism, about the sense and non sense of our actions. Where does the real future lie, what’s the real meaning to it all? I think that each and every one of us has to find this out for themselves. And to those who don’t understand this I recommend a go at Ritter der Kokosnuß.