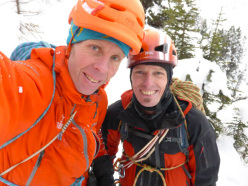 At Kandersteg in Switzerland Robert Jasper and Wolfram Liebich have made the first ascent of The Black Death, a new ice and mixed route graded WI7/M8, E5, 250m.

On 11 December German alpinist Robert Jasper and Wolfram Liebich established The Black Death, a demanding and dangerous mixed route above Kandersteg in Switzerland. The line, carefully monitored by Jasper for numerous seasons and climbed on his second attempt, weaves its way for 250m up NE face of the Gällihorns (2284m), at the entrance to the Ueschenental and circa 800m to the right of Walliser Cheeri.

Jasper and Liebich made a first attempt on 6 December and, climbing onsight, managed to make headway up to the 5th pitch but darkness set in and they were forced to abseil off. Five days later they returned to the base and this time, in 8 hours climbing, they managed to complete the route. Jasper has put forward the grade WI7/M8, adding E5 (on his risk scale) to indicate the dangerous nature of the climb.

Jasper described the route to Planetmountain as follows "The Black Death is an extremely demanding mixed climb, extreme even. It's located on"Schwarze Wand", the black face which is comprised of terribly friable rock. A fantastic, white drip runs down this creating a perfect mixed line. It was really hard to plant good pegs along the entire route due to the friable rock, and the hardest thing of all was having to climbing carefully, taking care not to break the rock and fall onto the dubious trad pro. I aided part of the crux pitch to place some normal pegs and then redpointed it first go."

judging by Jasper's description, this certainly isn't a route for everyone, and the German confirmed this immediately: "in order to climb it you need lots of experience at placing trad gear and you need to climb with a 100% safety margin. Not easy on thin ice and friable rock. Climbing this route in trad style, without bolts, was a great alpine adventure. Which all leads me to believe that The Black Death is currently one of the most demanding climb in all of Kandersteg."

The Black Death joins another route Jasper added to Kandersteg in 2013, namely, Ritter der Kokosnuß graded M12, WI5. We asked him to compare the two routes and Jasper replied "Comparing the two is almost impossible! Both routes are dangerous if you don't the sufficient experience; being a good climber is just one of the prerogatives. Ritter is circa M12 E4/5 (to give you an idea, Flying Circus is about E3/4) and while The Black Death is "only" WI7/M8, the danger level settles in at about E5/6. Having said that, the overall difficulty is far more complex than a simple number can portray and much depends on the conditions, on the quantity and quality of the ice. Let's just say that both are for highly experienced specialists."