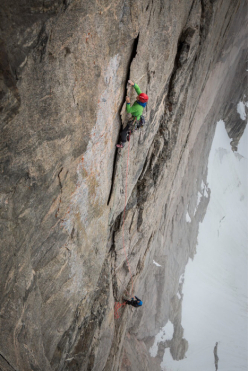 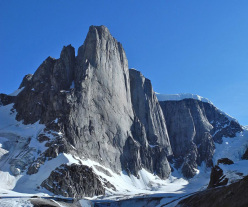 A team of alpinists comprised of Leo Houlding, Joe Möhle, Matt Pickles, Matt Pycroft and Waldo Etherington have made the first ascent of a new route up the hitherto unclimbed NW Face of the Mirror Wall in the Renland region of Greenland.

Details are few and far between at present due to communication difficulties, but what there is is ample: Leo Houlding has just reported that he and his team have successfully climbed a new route up the Mirror Wall, the striking big wall that juts out of the Edward Bailey Glacier in Eastern Greenland’s Renland area.

After having been dropped off on the glacier on 25 June the five alpinists established base camp, then advance base camp at the foot of the Wall before identified a line up the unclimbed NW Face. A portaledge camp was established and, despite setbacks (ill health coupled with poor weather), they managed to breach what has been described as some extremely thin, loose and technical sections which slowed progress and made the climbing both difficult and dangerous. With only four days left to climb the final 400m to the summit it seemed as if success might prove elusive, but after 12 days on the wall Houlding finally radioed through today stating that they were safely back in base camp, after having topped out in a snowstorm.

"We nailed it! The team has successfully climbed the Mirror Wall by the main face and descended safely." explained Houlding, adding "Such a huge wall - taller than El Capitan - and so blank and smooth that you can almost see your reflection. Strategically simple, tactically highly complex - the month long process of gazing deep into the mirror looking for a way to the top is over and we found it! We are back in base camp. The crew, little experienced in this game, have all excelled and not just survived, but thrived on the challenge. It has been a privilege to run wild with these strong guys out here in this grown up playground."

29/11/2006 - Leo Houlding interview
Climber, mountaineer, but also keen snowboarder, surfer, skydiver, base jumper and nature lover, Leo Houlding is one of the most famous rock climbers and mountaineers in the world.