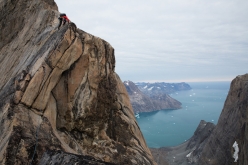 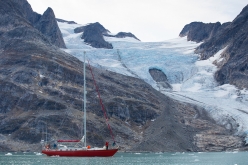 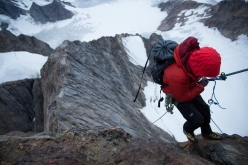 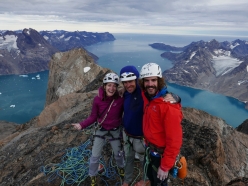 Paolo Marazzi talks about his 'sailing and climbing' experience in Greenland’s Mythic Circle. The result: two new 800m climbs and above all though ‘an absolutely unique adventure in the North Sea.’

"I'm throwing up. Shit, once again my mother was right." We’re just leaving the port of Isafjorod, a town in northern Iceland. "Artika", the sailing boat captained by Vidar (who resembles a Viking), is setting sail to guide us for the next 20 days around Greenland.

Paul decided where we’d go, to an area called Mythic Circle, and the fjord has such an absurd name that I simply don’t remember it. The start of my adventure could really seem like trashy novel, but it's true. And it was all due to that mix of beer, coffee and cigarettes I thought were obligatory with a sunset like that one.

I have to admit I felt pretty bad for the next 55 hours as we sailed the seas: water evidently isn’t my element. The secret was to lie in bed below deck as try to sleep as much as possible, day and night, and only get up a few times, just enough to drink some hot tea.

Early on the second day they shouted at me to come out on deck, I felt a little less sick. And when they passed me the binoculars and I saw the huge mountains on the horizon, all of a sudden I felt decidedly better. A full day passed though before we finally entered the fjord and dropped the anchor.

What a magical place, we were surrounded by icebergs as big as palaces and the only things that were bigger than those icy beasts were the huge rock faces. Billions of them, granite, steep, cool! And I caught sight of the famous Mythic face: wow, what a beauty.

We got off the boat (for the first time) and made a first reccie. After spending half a day studying it through our binoculars, we decided to have a loo at its other side. There we noticed a particularly beautiful line up a feature called Hidden tower. OK, we’d spend the night at the col in order to save a few hours of walking and then set off early the next morning. We had a plan!

Wake up call at 5, or better, the alarm clock rang at 5, but I’d been awake for hours, I hadn’t slept a wink: everyone had talked to me about the white bear so every time I heard the slightest noise I got up and turned on my head torch.

We started, Paul, Vikki, Matt and I. We climbed quickly, soloing fifth class terrain before roping up. I’m not even going to describe the summit ... all I’ll say is that it’s one of the coolest places I've ever seen, a quick glance at the photo will surely suffice.

At 11 pm we were back at the col. 800m route, they 5.11c or 5.11d, I don’t remember, in my opinion it’s somewhere in the region of 6c+, possibly a bit harder. As for the name ... ahahahah Cindarella ridge, seeing that Vikki, at the second rappel, dropped her climbing shoe. She taped her sock to get a bit of grip for next 15 abseils and the big halfway ledge.

We ate something wrapped inside our sleeping bags and then we dropped off to sleep. The next morning we got up, had breakfast and continued straight down to the boat. The others wanted to rest a few days, but I had a brilliant idea: supboard, and look for more climbing just above the sea! Paul joined me and so for two days we climbed, rested, and ate fish.

A few more days passed and then we looked for a second goal, we wanted to climb something in the vicinity, seeing that we were there. In the "Circle" there is a face with no name, unclimbed. OK, we decided to go there, via the col once again, but this time we knew the ledge systems and didn’t waste hours on end trying to get there.

We set off early from the boat, and after 4 hours we caught sight of the line: a very aesthetic ridge, extremely long, and although it didn’t seem difficult, it looked ace! It was 10 am and the base seemed to be there, about 400 meters from the glacier. In the end: we managed to touch rock at 1.30, that glacier was shit, a continuous series of climbing up and down, in and out of the glacier.

The route was extremely beautiful, simple, and the rock was probably perfect for 700 or 800 meters. We reached the top at sunset. Another indescribable view! We established some anchors and rappelled down to a big ledge where we had stashed our gear for the night.
The next morning we continued abseiling, waking up doing rappels was a strange way of toning our muscles, not really comparable to running in Sempione Park. The main difference is that all the girls running with super tight leggings were missing completely.

As we walked back to the boat we realized that the time had come to move on, to see something different, so we decided to leave the next day for Tassilaq, the largest town of the coast. From there we’d look for something interesting. 14 hours of sailing followed, during which I was fine, I didn’t feel sea sick. We stayed at Tassilaq for a few days but after walking around a bit we didn’t find anything interesting.

It was time to leave, the weather forecast around the Gulf of Denmark was bad so we had to anticipate our departure, The next 70 hours were spent in the 18-meter sailboat, with a night of 4 meter waves crashing around us, whipped up by winds up to 35 knots.

I’d never been on a boat before, if not on a ferry, and although water isn’t my element, it was really cool. It's true, sometimes I felt like I was locked up in prison locked up in four walls, with only those who shared with me those few square meters, surrounded by a large expanse of water I couldn’t drink. But I managed to escape, and from time to time I climbed mountains that I had never climbed.