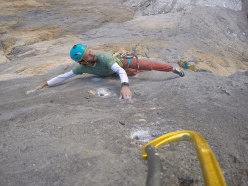 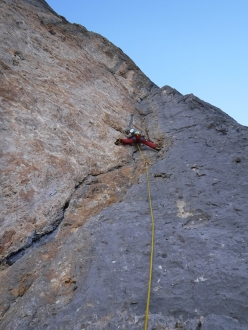 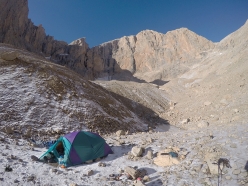 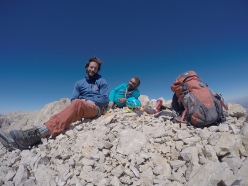 Zorbey Aktuyun reports about the first repeat of Nessuno (8a+, 470 m) carried out with Muammer Yalcın in the Aladaglar massif in Turkey.

Nessuno, established in 2012 by the Italians Rolando Larcher, Luca Giupponi and Nicola Sartori, is the hardest alpine sports route in Turkey and it took us 27 hours to climb clean! The route is not only hard, at times it is also fairly dangerous and so high up in the mountains, literally it no mans land… It takes 10-12 hours just to walk there!

The route starts from the glacier, and now that glacier is circa 15 meter lower than when Nessuno was first ascended. Getting to the first bolt was quite an adventure ;-) On our first attempt it started to hail, and I failed to reach the belay on pitch 3. We waited for 4 days for the weather to improve and let the route dry  out, and while we waited we also climbed some new boulder problems close to the campsite.

When the good weather returned we set off once again. Pitch 3, the crux pitch, required five attempts to go free. On my fifth attempt I knew I stood no chance, but nevertheless I went for it and somehow managed to pull it off. We continued up… and onsighted all the remaining pitches. We bivouacked in the small grotto on the route which also contains the route book; a nice place to spend the night. The next day, 27 hours after leaving the ground, we reached the summit.

Nessuno, Nothing, is a really apt description of the Vay Vay mountain. We send our thanks and respect from here to the first ascenders.