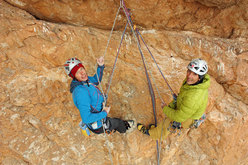 Rolando Larcher and Luca Giupponi at the fourth belay of Red, Moon and Star
Photo by Ince Recep 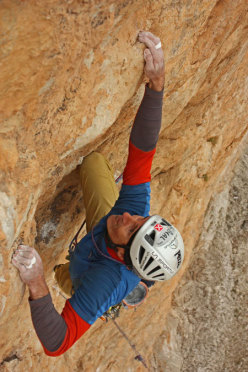 Rolando Larcher on the seventh pitch of Red, Moon and Star
Photo by Ince Recep 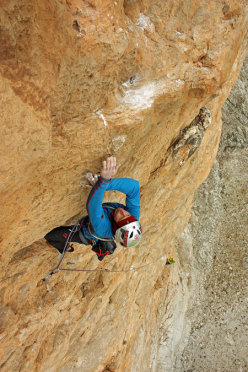 Luca Giupponi on the sixth pitch of Red, Moon and Star
Photo by Ince Recep 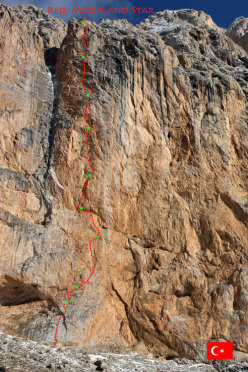 Red, Moon and Star, new route on Kizilin Bacì by Larcher and Giupponi

Once you go there, sooner or later you're bound to return. It seems as if Ala Daglar leaves a lasting impression, this paradise of mountains and streaked rock faces at Cappadocia in central Turkey. Confirmation of its irresistible draw comes from this new and difficult route established by the Italians Rolando Larcher and Luca Giupponi. Red, Moon and Star (the name hides no secrets) takes a 400m journey up the massive Kizilin Bacì rock face, one of the world's many mountains which are, unjustly, unknown to most. First ascended by the two policemen, the route climbs the right-hand side of the splendid limestone NW Face in nine difficult and overhanging pitches, while reaching max difficulties up to 8a/8a+ and obligatory 7b. After forging the route from the ground-up it was redpointed with time running out fast and temperatures dropping down to those associated with Christmas time... Worth underlining is the renowned hospitality of the locals, in particular Recep and Zeynep Incè, the wardens of the excellent Camping Aladaglar and tireless explorers of Turkish climbing, for in the beautiful Kazikli Valley alone, 230 routes have been established by Incè.

While this was Larcher's third visit to the motley coloured rock garden at Cappadocia, it was Giupponi's first and therefore (for us) an occasion to check whether that atmosphere and magic would strike again. Check out his report to discover whether he was spellbound, and savour the great photos by Recep Ince and the video produced by Andrea Tosi... Before delving into the story, we want to highlight that this time Gippo (a historic and popular pillar of the Italian sport climbing squad) seems to have lost a bit of his famous climbing “aplomb”.


RED, MOON AND STAR ON ALA DAGLAR by Luca Giupponi

Rolando had talked about Ala Daglar for a couple of years, mentioned its rock faces and his friends Recep and Zeynep. This husband and wife team originally from Istanbul, engineers and climbers, so in love with the place and its tranquillity that they left everything behind and came here to climb and run a campsite. A couple of photos had caught my attention and so, slowly but surely, the idea behind this journey started to form, the idea being to explore a new route up the 2944m high Kizilin Basì rock face.

We managed to depart on 30 September and in the afternoon on 1 October we already reached the base at the wall, accompanied by the fantastic Recep and immersed in a warm, red sunset. Kizilin Basì faces North West, it's a 400m high yellow limestone rock face, totally overhanging and extremely impressive from below. There aren't many obvious lines since there are many smooth sections, so we immediately searched for weaknesses, for the easy within the difficult. From below we both made out the same line of ascent, we obviously understood each other right from the outset. Without wasting a minute we set off immediately that very same afternoon and before nightfall we had finished the first two pitches: a 55m 7b followed by a 20m 6c which was to become the easiest pitch on the entire route. Unfortunately the temperatures plummeted the next days to 3 - 4°C with gusty winds which forced us to climb with numerous layers of clothing.

Our first ascent program set off with the alarm at 5:00am, followed by breakfast, a 1.5 hour approach to reach the base of the wall followed by climbing until the stars came out. Abseil down the fixed ropes in the beam of the headlamp and then a Turkish dinner (Kebab and Pide) until we were stuffed. The route name came sprung to mind during those days: red for the colour of the rock face, joined by the moon which we still saw as we set off each morning and the stars which accompanied us during the descent. Three elements which are found on the Turkish flag.

I have fond memories of those intense days, those long immersions into climbing, exploring friendship, wild nature and endless landscapes... everything I look for in these sorts of adventures. I vividly remember the voice of the muezzin who, form afar, called for prayer. The eagles flying free above us. A suspicious skulk of foxes. The sun which reached the rock, paradoxically signalling the end of the day. The fiery red rock and horizon before darkness quickly set in. And our two beams of light as they raced down the wall.

This is how the days passed, perched above the void until, after a difficult 9th pitch established by Rolando, the angle eased to vertical and we realised that the greatest difficulties lay behind us. We scrambled up another 60m and then reached the top of the pillar, exhausted and cold. We took shelter behind a rock and stopped to listen and observe the world around us. We were happy with life, happy to have discovered all those holds to free climb such an overhanging face.

It rained during the next days and we made use of this, resting and recuperated energy, both physical and mental. Recep accompanied us on a visit to his crag: 4 km down a dirt track from his campsite in the middle of the steppe with Ala Daglar constantly in the background, to then park on a plain with no crag in sight. We walked for 5 meters and suddenly a beautiful canyon unfolded beneath our feet, the Kazikli Valley which boasts a mighty 230 routes, perfectly bolted and many overhanging projects still to be freed. We were dumbfounded by Recep's work, in total solitude. This crag will surely be appreciated by many. The area has great rock faces, peaks that touch the altitude of 3800m, ideal for ski mountaineering too, a beautiful crag, unspoilt wilderness. I promised myself I'd return with my family.

We then attempted a section of the route, but it was really cold and we resisted for half a day. One day it started snowing while we were on the route; we pretended it to ignore it, but the snowflakes became bigger and bigger and we were forced to descend. It seemed like we were carrying out a winter ascent and at the base we wished each other Happy Christmas... We waited for the penultimate day and then set off, determined to play our last hand. Rolando had trouble setting off but after warming up his engine he climbed straight to the summit. I for my part set off brilliantly and sent the first pitches immediately, but I then finished my reserves quicker. Just before nightfall and beneath a light rainfall Rolando sent the final pitch first go, the only one possible, up the terrible slab with a difficult obligatory 7b section. I failed to redpoint this pitch, time had run out for a second attempt, as had my energy. I'd consumed all my reserves and was totally spent.

Recep followed us up the entire route with his jumars, camera and video-camera. His biceps were torn, his arms cramped up and without a headtorch he had to abseil into total darkness, after Rolando and before me. At the base we packed all the gear and, laden like mules, wandered down through the forest and dragged ourselves to the car for the last time. We were exhausted but supported by an immense inner joy for having achieved, in extremis, our aim.

Our expedition owes its success to the unconditional support given to us by Recep and Zeynep Incè, to their great hospitality and their fantastic, nourishing meals. Thanks for your great friendship!
Luca Giupponi

Red, Moon and Star and Ala Daglar seen by Rolando Larcher...
This was my third time in Turkey and I already know it's not going to be the last. I've travelled around the world a bit, but there are few places where I manage to feel so at ease as here in Turkey's Ala Daglar. It's not just a question of the climbing, it's something deeper and more intimate which stems perhaps from the tranquility which is palpable and which transmits an immense inner peace. Reliving these sensations 4 years down the line was extremely pleasant, just as it was rekindling the friendship with Recep and Zeynep. And also joining forces with Gippo after so many years for a project together, and witnessing his eyes so full of joy in this paradise.
Rolando Larcher - C.A.A.I.

Thanks to:
For Rolando Larcher: La Sportiva, Montura, Petzl
For Luca Giupponi: Five Ten, Mammut
For the photos and film, a special thanks goes to Recep.