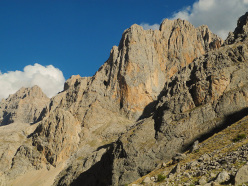 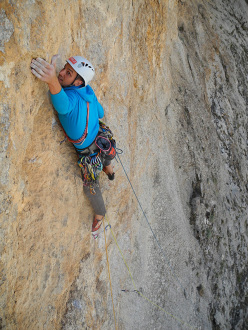 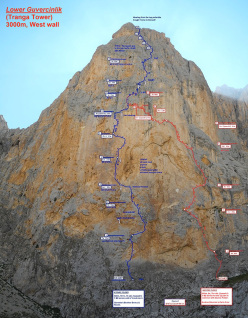 I think the right term for our vertical journey can certainly be "expedition", a word that encompasses many meanings and fully describes our August spent in Turkey. The Ala Daglar mountain range is located in the southern Turkey, with peaks ranging from 2500m to 3600m; it's an ideal place for rock climbing in summer and ski mountaineering in winter. After having gleamed valuable information and advice from the experts of this Turkish paradise (Rolando Larcher, Maurizio Oviglia, Marco Sterni and Nicola Sartori) we organised our gear and departed on 6 August, full of enthusiasm, head first into this adventure!

Our English was immediately put to the test as we arrived at the Customs Office in Istanbul: we had to explain that our drills, bolts, ropes, pegs, friends, cliff hangers etc weren't going to be used for a terrorist attack, but for climbing. After this our first impact with the local Turks was nothing short of traumatic to say the least: in search of four "prohibited" beers we ended up in gambling hall disguised as a mini market. Seeing the guns and somewhat worrying characters we jumped into the car as soon as possible and fled to the tranquility of the mountains!

None of us knew the area so the first two days were spent wandering through the park in search of rock faces to climb, until majestic Lower Guvercinlik - known locally as Tranga Tower - threw its spell on us. Tranga Tower is an impressive peak that soars upward for 600m and is comprised of strange limestone: good crimps are few and far between! To reach the base you need to walk for 2 and a half hours and so we decided to set up a a small base camp beneath the face which we dubbed "Tranga Tower Hotel". We transported food, water, gas and all our climbing gear and despite the loads our motivation and desire to head off into the unknown eased away the fatigue and creaking knees.

Enrico e Nicolò chose a line between the Larcher - Oviglia route Come to Derwish and the looming roof in the lower half of the wall, while Carlo and I set our sights on a line to the right of the large overhang. The Geremia brothers adopted an mixed ethic of bolts, pegs and friends to create Atomic Folder: 600 beautiful metres with difficulties up to 7b +/c on pitch 5, which I personally reckon is a masterpiece, and an A1 section on pitch 6 (not freed due to its difficulties). Subsequently the route becomes gradually easier (6c, 7a but with run-out bolts) and finishes up the final 200m, 5a/5c, all trad. It's a superb and committing route: knowing how to place gear and progress up technical slabs is the name of the game, all the way to the summit.

Carlo and I climbed a line circa 50m to the right and in establishing Mostro Turco we decided to use bolts only since the compact nature of the rock accept any trad pro. fter the first easy pitch the second acts as a filter - if only because of the extremely run-out bolts on this 7a+. Pitch 3 was climbed on August 9 (the day of my nth birthday, yet again on some rock face!): a spectacular 35m 8a crux pitch on micro holds, climbed by Super - Carletto.

The route then begins to head left to small cracks, slabs, ramps and unclimbable sections which were breached, after a grueling battle, with A1 aid. With great regret for having failed to free this section we continued to change the route line until we joined up with pitch 7 of Atomic Folder via a long traverse above the lip of the overhang and immense void. Oh well, it'll be a great free climbing project for our next expedition or for some other strong climbers! Two spectacular routes up a beautiful face, days spend in a fantastic setting in the middle of nowhere, completely alone; this is the result of our climbing holiday in Turkey. A holiday which served to strengthen our friendship and which will lead who knows where... perhaps to Turkey once again!

After a week's stay at our "Tranga Tower" hotel we paid Recep a visit, to give him our route topo, to buy some beers and to finally eat a superb dinner: parsley, zucchini, cucumber, tomatoes and 'piegora'! The following days were spent climbing and exploring new areas, making the first onsight repeat of Radio Eksen (7c max Larcher - Giupponi - Sartori) in the Cimbar Valley, Orient up beautiful Parmakkaya, Come to Derwish (7b max Larcher - Oviglia ) on Guvercinlik and various trips to the crags to add new routes.

A heartfelt thanks to Recep and Zeynep for their logistical help and for the stay in their beautiful Ala Daglar Camping, Mussa at the Market -B&B, Apinakaya at Camardi and to all the wonderful Turkish people we met along our travels.

Thanks to: Patagonia, Wild Climb, +Watt, RiskProtect , Zable Sport, Linea Verticale, and in particular Biomagen Plus and Farmacia alla Madonna (VI) who provided funding for the bolts and pegs