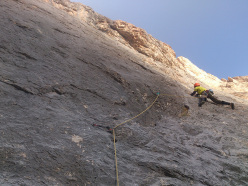 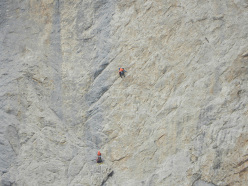 Turkish climbers Zorbey Aktuyun and Evren Kirazlı have carried out the the first repeat of Üç Muz (650m, 8a), the route first climbed in 2005 by Rolando Larcher, Maurizio Oviglia and Michele Paissan up the East Face of Demirkazik, Ala Daglar, Turkey.

Zorbey Aktuyun and Evren Kirazlı have successfully made the first repeat of Üç Muz up the East Face of Demirkazik (3756m), the route established in 2005 by Italian climbers Rolando Larcher, Maurizio Oviglia and Michele Paissan. The climb breaches the vertiginous 650m east face of the highest peak in the Aladaglar massif and offers continus difficulties with 7b obligatory climbing and an 8a crux. Many have considered repeating the line - one of the hardest in the Turkish mountains - but few have actually attempted it. Now two Turkish climbers, Zorbey Aktuyun and Evren Kirazlı, sign in with the first repeat, carried out in the best of all possible ways - totally free.

Zorbey stated: "It took us 34 hours to get to the grips with this route but it was immensely satisfying, a great adventure and also an immense battle, with bolts so distanced that at times we couldn't even see them. We'd like to thank the first ascentionists for the route and also for the power bars they left us with the summit book!"

Maurizio Oviglia, one of the first ascentionists of Üç Muz, commented: "I am particularly happy that the first repeat of Turkey's first big mountain sport climb put up by us Italians was carried out by two Turks. This means that these guys have understood the spirit with which we established our routes, have accepted the challenge and succeeded and are now able to do even better still. The mountains must unite, not divide, and today I'm happy for Zorbey and Evren as I relive those magical days of our first ascent and first free ascent."